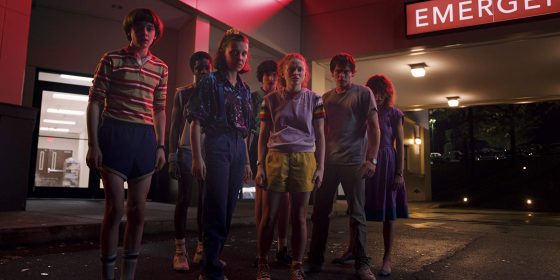 We last saw the gang from Hawkins, IN toward the end of the year in 1984 after having just defeated an army of Demodogs, freed Will from the Mind Flayer and closed the portal to the Upside Down.  Unfortunately now in the summer of 1985, a goopy and dangerous monster and evil Russians are making things more dangerous than they’ve ever been in Stranger Things (Season) 3.

In typical Stranger Things fashion, the group is divided into smaller groups before coming together for the climactic final showdown.  Elle, Mike, Max, Lucas, and Will are investigating the strange behavior of Max’s brother Billy, Dustin, Steve and Steve’s ice cream shop co-worker Robin have discovered a secret Russian base under the new Starcourt Mall, Joyce and Hopper are seeking out the source of a mysterious blackout that caused magnets around Hawkins to de-magnetize and mysterious land purchases and finally Jonathan and Nancy are looking into possibly diseased rats and missing chemicals around town.  My main criticism is simply down to character preference. I love everything with Dustin and Steve with the Elle and the Gang/Joyce and Hopper plots about equally behind them but I just don’t really care about Nancy and Jonathan, so their plot kind of just dragged until they joined up with the rest of the team. This season is definitely an improvement over last year though, which was still great but the solo Elle storyline went on for probably too long, especially that bizarre Chicago episode, and it took too long for the group to join up, basically only the last episode of Season 2.  Most of the gang is back together by the halfway mark in Season 3 and it just feels overall much more focused and better paced than last season. At this point in the show, everyone in the cast has really settled into their characters and you can definitely see the growth and changes to everyone since the first season. After feeling a little superfluous in the second season, Max and Billy have definitely come into their own and Billy especially has much more to do and is far more interesting this season. As far as new characters, Cary Elwes and Jake Busey do a great job of embodying every 80s movie douchebag and Maya Hawke’s Robin is a great addition to the main team and seamlessly joins the Dustin/Steve BFF duo with a blend of nerdy knowledge and sarcasm.

Settings things during the summer was also just a brilliant masterstroke and it this season truly feels like an 8-hour summer blockbuster.  The new mall settings is incredibly realized as far as a set and the period details and there’s stuff like the Fourth of July fun fair and the town pool that lends itself to great set pieces.  This season also seems to have really stepped up in terms of style. The show was never terribly shot or uninteresting to look at but this season feels a lot of times like it was guest directed by Nicholas Winding Refn with things like neon lights giving the shots gorgeous artificial color.  This season also feels like the funniest season of the show, with tons of great one-liners and humor from basically every character, like Hopper’s horror at Elle and Mike’s relationship or Dustin and Steve’s bromance. Evil Russians was one of the last 80s tropes that the show hadn’t paid homage to yet and they go all-in on their Soviet antagonists, even bringing in a hulking assassin who is straight out of The Terminator.  I do feel like they are getting very close to the edge of being too insane and ridiculous. If the group becomes some sort of international monster-fighting team or something in the next season, the show will probably have jumped the shark. The ending of this season also works so well as a series finale that I have to wonder what The Duffers Brothers will do for season 4 and if it will feel cheap.

Stranger Things is still great and just an absolute blast to binge.  It does a better job of delivering summer blockbuster thrills and fun than most of the movies that hit theaters and the characters are still so great and it’s fun just spending another 8 hours with them.  Hopefully, they can keep up the quality for the inevitable fourth season and I’ll definitely be there to see it whenever it hits Netflix.