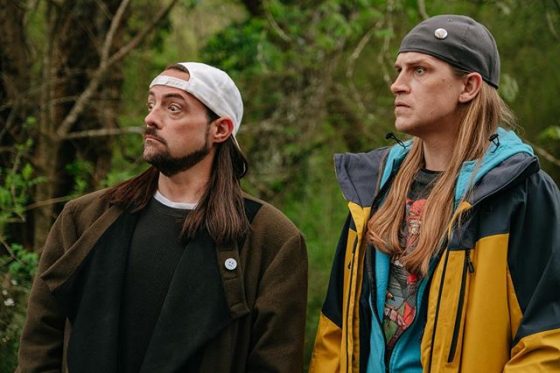 It’s been almost 20 years since the stoner duo of Jay and Silent Bob set out to stop a movie of their comic book alter egos, Bluntman and Chronic, from getting made but now they’ve discovered there’s a reboot of that movie in the works and they are on the road again to Hollywood to try and stop it in Jay and Silent Bob Reboot.  Written, directed and co-starring Kevin Smith alongside Jason Mewes, the duo learn from Brodie Bruce (Jason Lee) that Bluntman and Chronic is getting a fancy new reboot, including Chronic being gender flipped with Melissa Benoist starring alongside Val Kilmer as Bluntman.  The duo goes on a road trip to the west coast, encountering a bunch of old and new friends, including Justice (Shannon Elizabeth) who reveals that she and Jay have a daughter named Millennium Falcon (Harley Quinn Smith), who joins her dad and his hetero life partner on their quest.  Brian O’Halloran, Joey Lauren Adams, Redman, Method Man, Craig Robinson, Justin Long, Jason Biggs, James Van Der Beek, Kate Micucci, Donnell Rawlings, Joe Manganiello,  Ben Afleck, Matt Damon, Fred Armisen, Molly Shannon, Chris Jericho, Ralph Garman, Grant Gustin, Tom Cavanaugh, Rosaria Dawson, Chris Hemsworth, Adam Brody, Dan Fogler, Tommy Chong, Nicolas Cage and Adam Brody are all appearing as well, so half the movie will probably just be waiting to see who will pop up in what role next.  The movie was supposed to start shooting in 2017 but got delayed until February of this year and it’s finally arriving on October 15th.  Check out the first red-band trailer below.