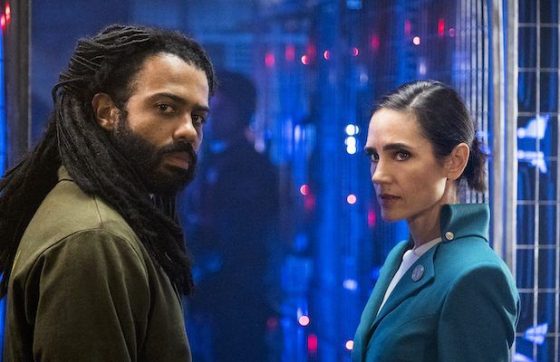 Originally developed to air on TNT, the rebooted TV version of Snowpiercer is heading to TNT’s sister network, TBS, as the Turner networks are looking to diversify their offerings on both networks.  Following the same basic story as the 2013 film by Bong Joon-Ho, Daveed Diggs takes over the hero role from Chris Evans as Layton Well, a poor member of society in the back of the gigantic train Snowpiercer, which holds the entire surviving population of humanity after an apocalyptic climate shift left the outside world frozen and unlivable.  Jennifer Connelly co-stars as Melanie Cavill, who lives in the first-class section of the train and does all of the announcements as the “Voice of the Train”.  Mickey Sumner, Annalise Basso, Sasha Frolova, and Alison Wright co-star and Josh Friedman, who worked on The Sarah Connor Chronicles and is worked on the scripts for Avatar 2 and Terminator: Dark Fate, is the showrunner.  The series debuts in the spring of next year and you can check out the trailer below.