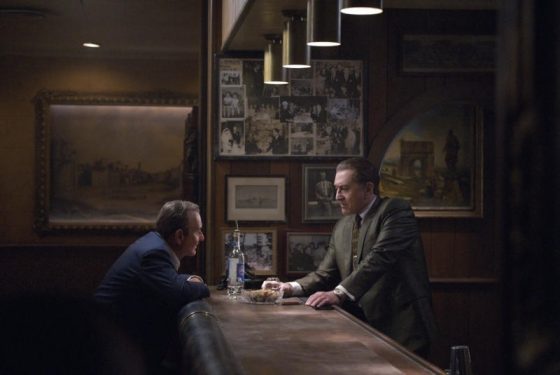 One of the most highly anticipated Netflix acquisitions is finally almost here with the latest film from Martin Scorsese, The Irishman. After 24 years (since 1995’s Casino), Robert DeNiro reunites with Scorsese for the ninth time to star as Frank Sheeran, a World War II vet who becomes a hitman for the mob and may have been a pivotal player in the disappearance of Jimmy Hoffa (who is played by Al Pacino).  This is the first time Al Pacino has been directed by Scorsese and Joe Pesci is back as well as mob boss Russell Bufalino.  Jesse Plemmons, Bobby Cannavale, Harvey Keitel, Anna Paquin, and Ray Romano co-star and the script was written by Steve Zaillian and adapted from the book I Heard You Paint Houses by Charles Brandt.  The movie will span decades and Scorsese is utilizing the very in-vogue de-aging CG to transform Robert DeNiro into his younger self.  There’s not a solid release date yet but the film will debut at the New York Film Festival in September and then probably a mid to late fall release on Netflix.  Check out the trailer below.

See De Niro Through the Decades in The Irishman (Trailer)