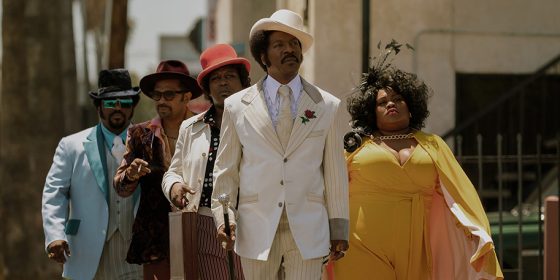 For most of us, it’s been quite a while since we’ve been excited about an Eddie Murphy movie but we might be on the verge of a Murphyaisance starting this fall with the Netflix movie, Dolemite is My Name.  Murphy stars as the legendary Rudy Ray Moore, who had his fingers in all kinds of pies back in the ’70s, like putting out music and comedy albums, but he’s probably most remembered for his alter ego of Dolemite, the kung-fu fighting pimp who became a Blaxploitation sensation.  Dolemite is My Name goes behind the scenes to show the story of how Dolemite got made back in 1975 and, along with Murphy, there’s a murderer’s row of awesome co-stars including Tituss Burgess, Craig Robinson, Mike Epps, Da’Vine Joy Randolph, Keegan-Michael Key, Snoop Dogg, and Wesley Snipes, who is playing Dolemite director and co-star D’urville Martin and Craig Brewer, director of Hustle & Flow, is directing. The movie will be streaming on Netflix and in select theaters in the fall and you can check out the trailer below.