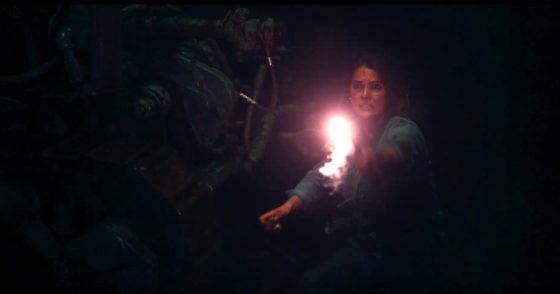 Director Scott Cooper is making his first foray into horror with some excellent collaborators behind him for next year’s Antlers.  Produced by Guillermo Del Toro and based on a short story by Channel Zero’s Nick Antosca, Antlers stars Kerri Russell as a teacher who becomes worried about the dark and disturbing drawings and writings of one of her students.  Her brother the sheriff, played by Jesse Plemons, gets involved when grisly murders start to occur around their small town.  It’s teased at the end of the trailer but it appears Kerri Russell’s student was harboring some sort of horrifying deer monster that is straight out of the Del Toro creature catalog.  Cooper has directed movies like Crazy Heart, Hostiles and Into the Furnace and even though this is full-on horror, it looks like a lot of his signature touches, like a small rural town and brutal violence, will be on display here.  Check out the trailer below.

Christian Bale Returns to the West with Hostiles (Trailer)