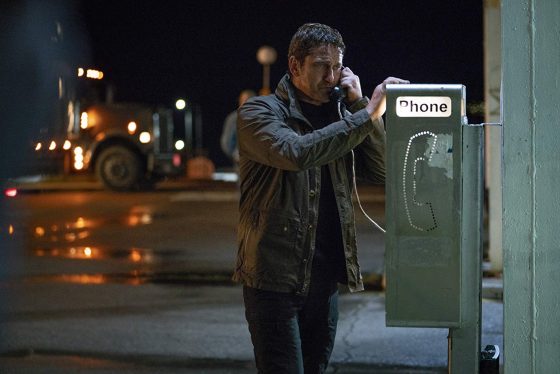 Olympus Has Fallen was a fun, retro action movie that was definitely way better than it’s bloated and neutered competition, White House Down but I don’t think anyone could have imagined that we would get a trilogy out of the adventures of Secret Service agent Mike Banning (Gerard Butler) but here we are with the third entry in the Fallen franchise, Angel Has Fallen.

In the time since London Has Fallen, Morgan Freeman’s Allan Trumbull has become president and Banning is his pick to replace the retiring Secret Service Director, David Gentry (Lance Reddick) as the new director.  While on a fishing trip, a devastating drone attack is unleashed on the President, killing everyone except the President and Banning. The FBI, led by Agent Thompson (Jada Pinkett Smith), discover evidence that Banning was behind the attack and he’s arrested.  Banning is freed when mercenaries attack his prison transport and he goes on the run to clear his name. Angel Has Fallen is absurdly predictable, especially if you’re an action fan like we are. The movie does nothing to hide who the main villain is and there’s a secondary villain that is kept hidden but it’s obvious who it is from the first 10-15 minutes of the movie.  The movie hits most of the standard beats you would expect from a Fugitive style movie and there are 1 or 2 slightly surprising beats but it doesn’t do anything unique or interesting.

Action wise, Angel Has Fallen is solid throughout.  Some of the earlier action feels a little regressive in a post-John Wick world, shot in darkness with quick cuts that make it feel like the camera is in Gerard Butler’s armpit and it’s hard to tell what is happening.  Later sequences are much clearer and more interesting, including a chase involving a semi-truck and a massive finale at a hospital. Gerard Butler continues Banning’s lovable asshole schtick and gets a few decent quips and swears and grumbles his way through the movie.  Nick Nolte is a ton of fun as Banning’s estranged dad, who left the family when Banning was young and has been living off the grid and has rigged the land around his cabin with explosives and surveillance equipment. Piper Perabo takes over from Radha Mitchell as Banning’s wife Leah but the role has been such a non-factor in all of the movies that it doesn’t really matter who is cast in the role.  As the obvious villain, Danny Huston chomps scenery as Banning’s old pal turned villain Wade Jennings, who runs a PMC called Salient Global and is constantly talking about the thrill of combat and how he and Banning are “lions”. Tim Blake Nelson gets to do his usual weaselly thing as Vice President Kirby, who has to take over the country while Trumbull is in a coma following the drone attack.

Angel Has Fallen is a decent, solid action movie but don’t go in expecting anything new or interesting.  It just goes through the standard beats of the “wrongfully accused hero on the run” stories we’ve seen before, although it definitely does things better than say, Taken 3.  If you see it on streaming or on cable sometime in the near future, it would definitely be solid watch on a lazy weekend day.