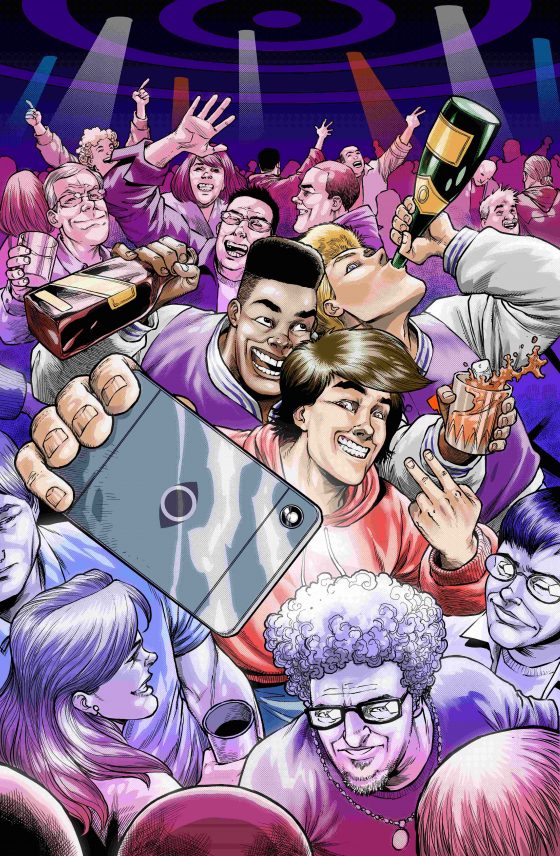 The Jocks get their just rewards for being part of the frozen experiment, Alvin Pingree’s business practices get examined and two short shorties are packed in this finale issue of Planet of the Nerds. In Battle of the Planet of the Nerds, the jocks sneak into Alvin’s mansion, only to find a trap waiting for them. But nothing is what it seems, Avin does not want to get revenge on the Jocks, but an opportunity. The secondary comic explores Alvin’s management of company time, personnel, and his future in Alvin Pingree: Super Men. The heroic deeds of an aquatic hero are detailed in Where Walks…The Kipper!, written by Kek-W and an illustration by Brian Bulter. A woman is placed on display and finds her own comforts in Captive, created by Carol Lay.

Battle of the Planet of the Nerds finds the jocks face to face with Alvin, but their retribution is something completely different. Instead of a nuke size wedgie or a swirlie that never ends, the jocks listen to an offer. Alvin wants to make up for the accident that trapped the jocks for 30 years, he purposes the jocks to join his company. Enjoying the good life, the jocks take advantage of Alvin’s goodwill. However, nothing comes without consequences and the jocks will have to decide where their true future will lie.

The whacky hijinks of these time-traveling jocks come to a close in this final chapter. The 80s teens had awake to a strange place that made them rethink everything about their lives. From pop culture, economic inflation, mobile phones, and personal hygiene, the jocks get a crash course in modern life. Paul Constant and Alan Robinson tackled many subjects in the story, comparing the differences from the 80s mentality. Constant’s writing kept the story upbeat and worked in some complex elements without slowing the pace. Robinson’s expressive character models added great comical flair and really extended the emotions on the panels. Faces have fun arrangements for extreme looks of disgust, anger, and confusion.

Planet of the Nerds is a great reality check on how progressive and primitive society has come. The story could use a little more room to explore certain storylines, but most loose ends wrap up neatly by the conclusion. The familiar themes of the 80s and references to today’s issues, this series was a fun read that would be sure to delight any old school comic fan.