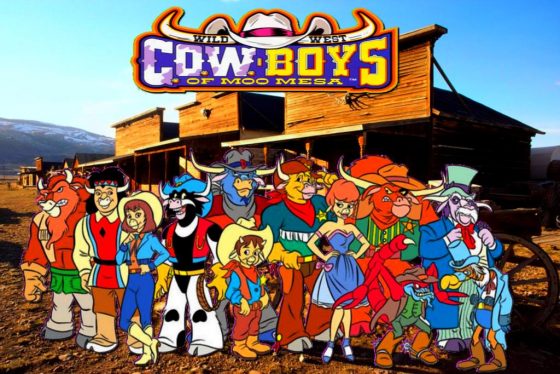 The early 90s was an arms race in the world of Saturday and weekday afternoon cartoons trying to get pull off some of the heat generated by TMNT.  Along with stuff like Street Sharks, Bike Mice from Mars and Mighty Ducks, there was the western-themed Wild West COW-Boys of Moo Mesa (COW stands for Code of the West).  Debuting in 1992, COW-Boys of Moo Mesa had an insane backstory where a comet hits the Earth sometime in the 19th century, creating a massive stone mesa that reaches beyond the clouds.  All the wildlife on the mesa, which is mostly cows and other bovines, are mutated and transformed into intelligent, anthropomorphic creatures.  Emulating the way of life from the era when the comet hit, society on the messa turns into a wild west frontier town and the main heroes, Marshall Moo Montana, The Dakota Dude and Cowlorado Kid protect the town of Moo Mesa from villains like Sheriff Terrorbull, Skull Duggery and Bat Blastagun, voiced by actors like Jim Cummings, Jeff Bennett, Pat Fraley, and Michael Greer.  The show lasted for 2 seasons and 26 episodes total and was in reruns until 2001, where it was airing in reruns on Toon Disney.  The show had a number of toys, video games and comics and a bitching, Garth Brooksy theme song sung by country arts Billy Dean.  You can watch the first episode, “Bang’Em High” below.