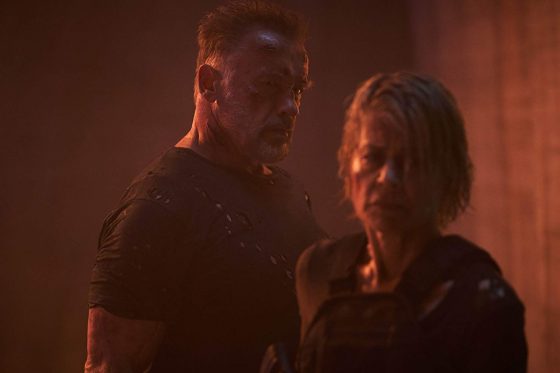 No classic action franchise has fallen quite as hard as Terminator with sequels like Genisys and Rise of the Machines eroding the goodwill created by the essentially perfect first two movies in the series.  With James Cameron back behind the scenes and Deadpool director Tim Miller at the helm, hopefully, Terminator: Dark Fate will be the revival we are all hoping for.  Essentially pulling a Halloween 2018, Dark Fate erases everything but The Terminator and Terminator 2 from the canon and takes place 27 years after Terminator 2.  Linda Hamilton is back as Sarah Connor and joins forces with Grace (Mackenzie Davis), an enhanced cyborg assassin, and a T-800 (Arnold Schwarzenegger) living in hiding to protect a young girl named Dani (Natalia Reyes), who is the target of a highly advanced new Terminator designated the Rev-9 (Gabriel Luna).  The Rev-9 can split off it’s “skin” and form two autonomous versions of itself and seems to be able to generate all sorts of weaponry similar to the T-1000 as well.  The action looks great and the return of Linda Hamilton is something that will hopefully elevate this sequel and we’ll find out on November 1st.  Check out the new trailer below.