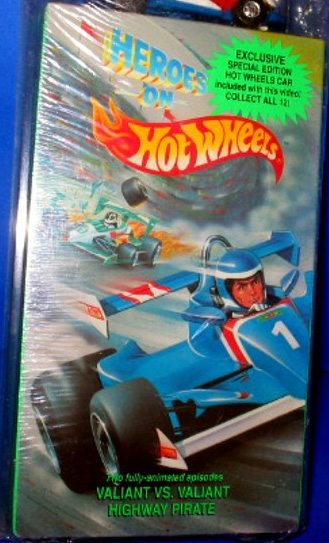 Way back in 1990 and prior to at least three name changes, The Family Channel was airing Heroes on Hot Wheels, based around the iconic line of collectible toy cars.  The series was actually an American adaptation of Michel Vaillant, a French comic book hero in the vein of TinTin (who actually had stories appear in issues of TinTin magazine beginning in 1959) who was also a bit Speed Raceresque, in that he was a master of all racing from boats to Formula One to off-road.  For Heroes on Hot Wheels, his name was changed to Michael Valiant and was voiced by Ian James Corlett and the series followed Michael and his racing team/family as they traveled the globe competing in races and trying to foil the nefarious schemes of Team Leader, an evil racing organization that wants to crush Team Valiant and take over the racing world.  The series ran for 65 episodes and was notably released on VHS tapes that featured two episodes as well as an exclusive Hot Wheels car that was featured in one of the episodes.  You can check out an entire episode below, “Highway Pirate”, which, as far as I can tell, is the third episode in the series and find Michael being forced to team with Team Leader when a mysterious psychopath is destroying people’s cars around the city.

Everything Action Theater: Attack of the Killer Tomatoes (Animated Series)