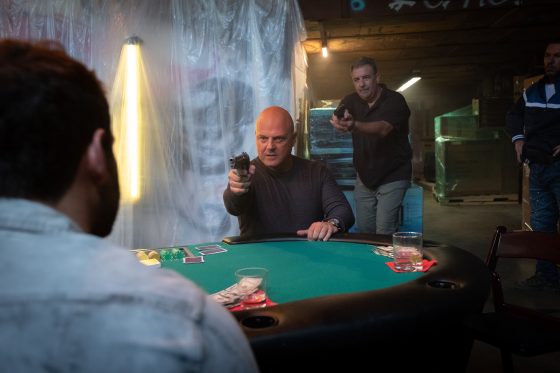 Michael Chiklis and Bruce Willis co-star in the new heist movie 10 Minutes Gone, which is out in theaters and On Demand now.

Chiklis plays Frank Sullivan, who plans a bank heist along with his brother Joe (Tyler Jon Olson) and a crew of criminals at the behest of crime boss Rex (Bruce Willis).  Something goes wrong with the brothers carefully conceived plan and Frank finds himself ambushed and knocked out trying to get to an extraction point.  When he comes to, Joe is dead and the object of their heist, a mysterious case, is gone.  After getting clear of the scene, Frank decides to find and confront the rest of the crew one by one to find out who might have set them up, all while trying to stay ahead of Rex’s fixer Ivory (Lydia Hull), who is cleaning up any loose ends.  The plot is pretty straightforward and basic and doesn’t really have a lot of twists and turns, despite the fact that it seems to be trying to do some sort of Reservoir Dogsesque gimmick of flashing back to the heist every time Frank confronts another member of the crew, showing what they were doing during the titular 10 minutes Frank was knocked out.  The problem is that none of the flashbacks really reveal anything interesting or cool and feel like an excuse to recycle footage from the heist.  The opening heist itself is solid and has a pretty cool shootout with the cops but the fact that they show most of it right at the top both gives up the movie’s high point right away and doesn’t leave a lot of room for reveals.  If the movie had started with Frank waking up and not remembering anything and then we flashed to pieces of the heist without seeing at all at the beginning, that would probably have been more interesting instead of the by the books structure the movie actually has.

Michael Chiklis is solid as always as Frank.  He’s not quite at full Vic Mackey level but he’s appropriately tough and intimidating when he’s trying to get info from the various members of his crew.  Bruce Willis seems like he’s slightly above totally not caring but it’s extremely obvious he probably filmed most of his scenes in a day or two, as he never leaves the set he’s on except for a brief few minutes at the end.  It’s a phoned-in performance but he seems to be at least trying at times, which is better than a lot of the other action/crime movies he agrees to be in.  The rest of the cast is not really too noteworthy other than Lydia Hull as Ivory, who gives a kind of Terminatoresque quality to her fixer character as she stubbornly follows Frank and does whatever she needs to do to get the job done, including using a guy as a battering ram to break through bulletproof glass.

10 Minutes Gone is a decent heist/crime movie but it definitely peaks right at the start with its heist sequence and nothing else really matches that level again throughout the movie.  Michael Chiklis is solid and while the plot is pretty basic and by the books, it’s entertaining enough to possibly rent or stream at some point.