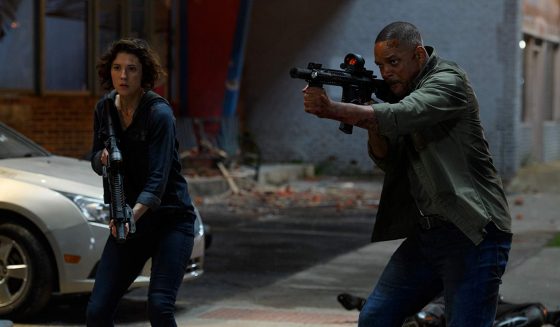 Director Ang Lee has teamed up with Will Smith…and Will Smith for Gemini Man but unfortunately, the only thing interesting about it is the way it’s being presented in certain theaters.

Will Smith stars as an aging assassin, Henry Brogan, who is essentially a more depressed and remorseful Deadshot.  After doing one final hit for the DIA, Henry meets with an old friend, Jack, who tells Henry that the man he killed wasn’t a terrorist like he was led to believe and that he should contact one of Jack’s contacts, Yuri, in Budapest.  A government hit team is sent to kill Henry, but he takes them out and rescues fellow DIA agent Dani (Mary Elizabeth Winstead), who was put in place to surveil Henry during his retirement. The duo tries to figure out why the DIA wants them dead and are repeatedly attacked by “Junior”, a younger clone of Henry created by Clay Varris (Clive Owen), the head of the PMC Gemini.  The plot is extremely generic hitman/espionage drama that we’ve seen countless times in stuff like the Bourne franchise and even the addition of cloning doesn’t really add much to maintain interest. The movie is also shockingly heavy on dialogue scenes and exposition, which drags the movie down until one of the action sequences begins. The heavy focus on non-action is bafflingly as well because of how Ang Lee shot and wanted the movie to be seen, in 3D High Frame Rate (his vision is 3D 4k at 120 FPS but literally no theater in the US can show it that way).  I saw the film in 3D at 60 FPS 4k but when a huge portion of the movie is just dialogue scenes, what is really the point of all that tech? When the action does kick in, the HFR does make things clear and smooth but some of the action, like the big motorcycle chase/fight, is almost too smooth and too clear so that they look strange and unrealistic. The HFR is basically like if you turn on Motion Smoothing on your HDTV but even more extreme. Some of the sequences look great in it, especially the final shootout and when the movie is doing location establishing shots or if there are any reflective surfaces like glass or water, it looks unreal in a good way.

Acting-wise, everyone is fine but no one really seems to be putting in maximum effort either.  Will Smith is pretty grim as Henry and Junior but he does a solid job in both roles, especially Junior, who was a fully digital character created via motion capture and de-aging tech and is seamlessly integrated into almost every scene he’s in.  Clive Owen is just doing a generic bad guy take and the only person who seems to be having any real fun is Benedict Wong as Henry’s pilot buddy Baron.

As a strange experiment in film technology, Gemini Man is an interesting mess.  I’m glad I was able to check out what HFR is like but I also don’t think I really need to see another movie in that format ever again.  Without the 3D and HFR, Gemini Man is just a generic and kind of boring assassin/espionage movie that would maybe be a decent rental or streaming option when it comes out but, unless you really want to experience the HFR, is not worth rushing out to theaters.