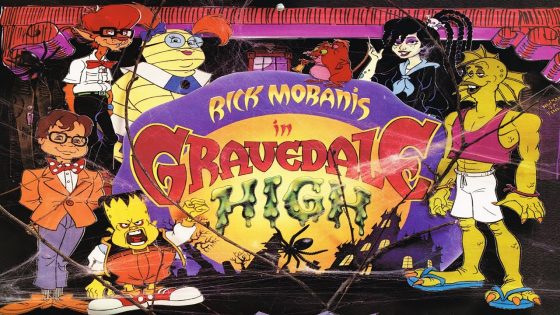 Debuting in 1990 for one season on NBC Saturday mornings, Hanna-Barbara’s Gravedale High, if it’s remembered at all, is best known for featuring Rick Moranis in the starring role.  Moranis played Max Schneider, who is the only human teacher at Gravedale High, a school for monsters that seem to be the next generation of Universal Monsters, like Vinnie Stoker, a cool Fonzieesque vampire, Frankentyke, a diminutive Frankenstein monster, and Gill Waterman, a Creature from the Black Lagoon.  Despite its short existence and seeming disappearance from pop culture knowledge, the show had an insane voice cast alongside Moranis, including Frank Welker, Tim Curry, Eileen Brennan, Jackie Earle Haley, Ricki Lake, Jonathan Winters, and Maurice LaMarche.  The show lasted for 13 episodes and you can check out the first episode in full below.

Everything Action Theater: Attack of the Killer Tomatoes (Animated Series)