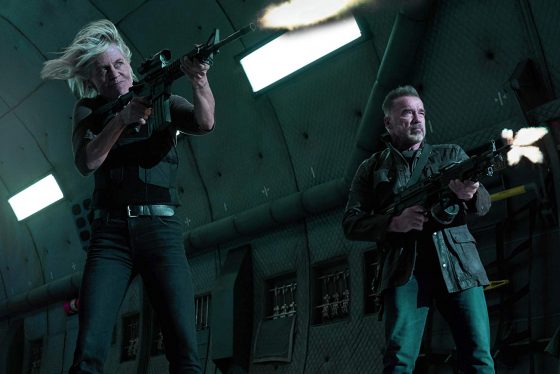 The Terminator franchise has been in dire straits in recent years, especially with 2015’s Terminator: Genisys, but with James Cameron back as a producer and a reset of everything but the first two films, Terminator: Dark Fate is easily the best of the sequels that followed T2, while still nowhere close to that classic or the iconic first film.

Dark Fate establishes a slightly new timeline right out of the gate with it’s opening scene and then jumps to Mexico City and Dani Ramos (Natalia Reyes), the target of the new evil AI Legion that has taken the place of Skynet in the future of 2042.  Grace (Mackenzie Davis), an enhanced human soldier and the Rev-9 (Gabriel Luna) are both sent back to the present day in classic Terminator fashion, with Grace there to protect Dani and the Rev-9 there to kill her before she can fulfill her destiny in the future.  A wrinkle gets thrown in when Sarah Connor (Linda Hamilton) arrives just in time to save Grace and Dani following a massive road battle and reveals she has been getting texts from a mysterious contact who has been telling her for decades when and where new Terminators will appear.  Dark Fate, besides its opening twist, is fairly standard when it comes to the Terminator franchise in that it’s mostly a long chase as Grace, Dani and Sarah try to stay ahead of the Rev-9 and figure out a way to stop him. The “It’s not Skynet, it’s Legion now” detail feels a bit lazy and pointless because there really isn’t anything drastically different between the two futures, besides the fact that in the Legion future, humanity can apparently augment themselves.  It feels a little long at times but the action and characters keep things from getting too bogged down. Speaking of the action, there are some fantastic set-pieces, including the aforementioned road battle outside of Mexico City, an insane sequence inside a plane and the final battle inside a dam. The glimpses of the future war, which are always a Terminator highlight, are cool as well, including an instantly iconic shot of Terminators coming out of the water to attack human survivors  Some of the action is a little CG heavy and some of it is at night/underwater, which makes it a little murky and hard to see but overall there’s definitely plenty of great action on display.

If there’s one reason to see Dark Fate, it’s the return of Linda Hamilton.  It is so fantastic seeing her back and her re-introduction immediately reaffirms her status as one of the most badass ladies in action history.  The rest of the cast is pretty great as well and their chemistry and energy is much better than say Genisys or Rise of the Machines. Mackenzie Davis gets to flex her action muscles as Grace and the fact that she is still human adds slightly more danger to all the action.  They do lean a bit too hard on a detail where she can only fight in short bursts before needing water and a specific medical cocktail, so there’s a lot of scenes where’s she gasping for air and fumbling for a syringe that brought back flashbacks to ‘chems” in Bourne Legacy.  Gabriel Luna seems to be having a blast as the Rev-9 and he’s easily one of the best villains in the franchise and definitely one of the coolest Terminators visually. He has the liquid metal power of the T-1000 but that liquid metal is over an advanced Terminator metal skeleton, so he can split himself in two which lets him do things like have his skeleton drive a truck while his liquid form tries to jump the truck driven by Grace and Dani.  It takes a while for him to appear but Arnold is fantastic as always, this time as a T-101 named Carl who has been in hiding since the 90s. There’s some funny one-liners and moments throughout the movie but Arnold really delivers on the humor front and the movie gets an extra spark from the moment he arrives.

The Terminator and Terminator 2 are unassailable classics of the action genre and Dark Fate is definitely not anywhere near the level of those two films but it is the best Terminator movie in a long while and the return of Linda Hamilton is worth seeing it alone along with some solid new characters and mostly great action sequences.