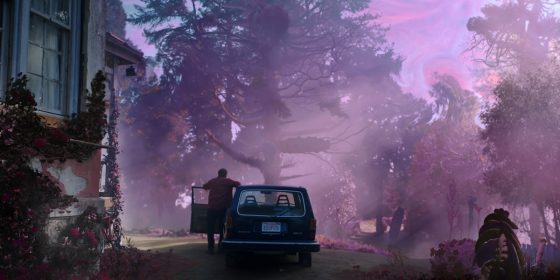 Nicolas Cage seems to have found his spiritual successor to Mandy with next year’s Lovecraft adaptation, Color Out of Space.  The long-overdue return of director Richard Stanley, who essentially vanished from directing after he was kicked off The Island of Dr. Moreau, Color Out of Space stars Cage as Nathan Gardner, who lives his family out in the country.  A strange meteorite crashes nearby and starts to effect the plants, animals, and people in the general area in strange and increasingly disturbing ways.  Joely Richardson, Madeline Arthur, Elliott Knight, and Tommy Chong co-star.  The movie has the same producing team as Mandy and it is giving off the same neon fueled nightmare vibes of that movie and if there’s anyone who’s a perfect match to embody the decaying sanity of a Lovecraft story, it’s Nicolas Cage.  Color Out of Space arrives on January 24th next year and you can check out the trailer below.

Finn Wolfhard Gets Creepy on Mackenzie Davis in The Turning (Trailer)