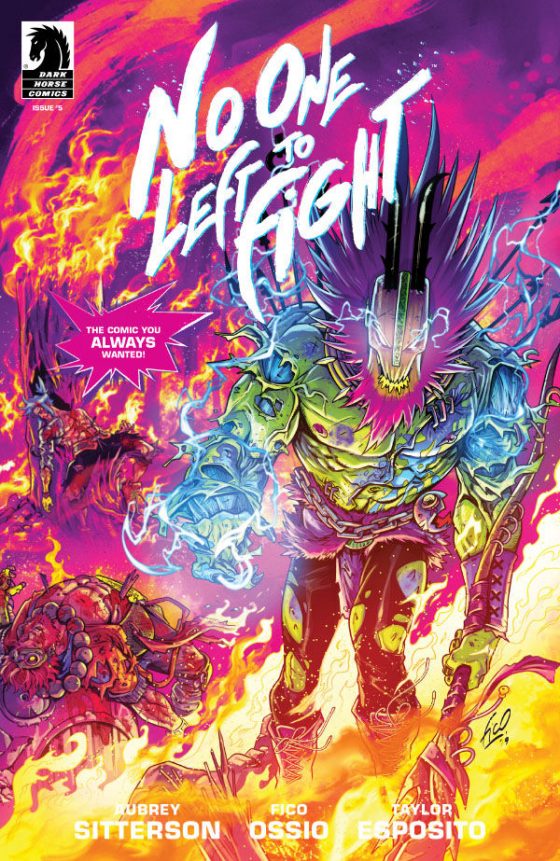 A monstrous foe returns from the dead and is set on taking revenge against the heroes. The Hierophant resurrects Bruton, a vicious warrior that was defeated long ago by Vâle and Timór. Shocked by Bruton’s arrival, Vâle and Timór do all they can to stop the undead villain. However, Bruton has gained new strength that proves to be a challenge for both fighters. Now a showdown of fierce might is underway and only the strongest warrior will be the victor!

The Hierophant’s fiendish plan to defeat Vâle brings out one of Vâle’s greatest foes back to life. Bruton was responsible for injuring Krysta in the past and returns more ferocious than ever. With the lives of friends and family at stake, Vâle, Timór, and Krysta fight with everything they got. But the resurrected Bruton is like a zombie berserker and can take the hits without stopping.

This supercharged issue is packed with all the intense action it has been hyping up and more. Aubrey Sitterson and Fico Ossio waste no time to jump straight into the heat of battle. Sitterson introduces a new opponent in a booming and merciless fashion. Bruton posses a dangerous amount of power and silently absorbs a barrage of damage. But his fury is felt by his own attacks, tossing Vâle and Timór around like dolls.

The intensity of the combat is conveyed nicely by Ossio great artwork. There are tons of awesome high flying strikes and reaction shots, capturing the powerful exchange between the warriors. Raciel Avila also provides dazzling colorwork to round out the great designs with a shower of neon colors to make the artwork looks fresh and lively.

No One Left To Fight’s martial art and manga inspirations come to light in this electrifying issue. The familiar tones help set up the basis of this fast-paced story, but it moves to its own rhythm by the end.