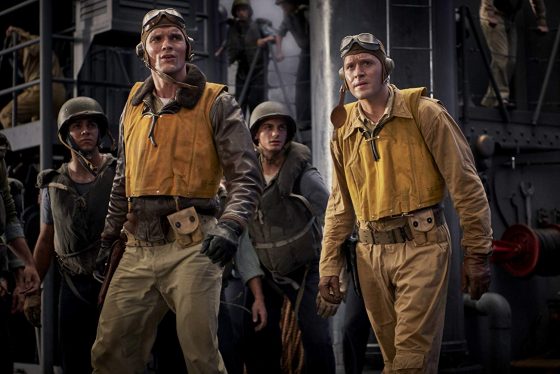 Boosted by its Stephen King pedigree and it’s status as a sequel to one of the greatest films ever made, Doctor Sleep was shockingly upset over the weekend at the box office by Roland Emmerich’s Midway.

Midway took in $17.5 million over the weekend, which is definitely not a runaway smash hit but enough to take the top spot.  Compared to recent World War II movies, it was a better opening than Hacksaw Ridge but below Fury and it was nowhere near the movie it most resembles, Pearl Harbor, which made almost $60 million in 2001 when it opened.  It’s the third-lowest wide release opening for Roland Emmerich, only topping Stargate and Universal Soldier.

Doctor Sleep only managed to make about half of what was expected from it by analysts with $14.1 million.  It had good reviews and the audience reaction (at least those who saw it) was solid according to Cinemascore, so it’s kind of baffling why it failed to perform.  Stephen King has never been hotter, everyone loves Ewan McGregor and director Mike Flanagan is one of the best horror directors currently working, so it seemed like all the elements were in place.  It’s the lowest Stephen King based opening in recent years, lower than even the Carrie from 2013 and The Dark Tower and for Ewan McGregor, the opening puts Doctor Sleep between The Men Who Stare at Goats and Christopher Robin.

Playing With Fire took third place with $12.7 million.  It’s well above expectations and seems like it might have some legs with the family audience, at least until Frozen II arrives to crush everything right before Thanksgiving.

Last Christmas and Terminator: Dark Fate rounded out the top 5.  Last Christmas opened to $11.6 million. It could hold on fairly well as no real Christmas themed movies are arriving for the rest of the month but it also seems like maybe it would have been better as a Netflix movie or something like that.  Terminator took a massive dive in its second weekend, falling 63% with just another $10.8 million and barely holding off Joker in its sixth weekend of release. International grosses are not helping Terminator either, as it has made $199 million total so far worldwide and it has opened in basically every major market.

Speaking of the aforementioned Joker, it is now the most profitable comic book movie of all time with $984 million worldwide and should cross the $1 billion mark very soon.

The Per Theater average went to Honey Boy, starring Shia LaBeouf, which took in $75,266 in each of the 4 theaters it played in.