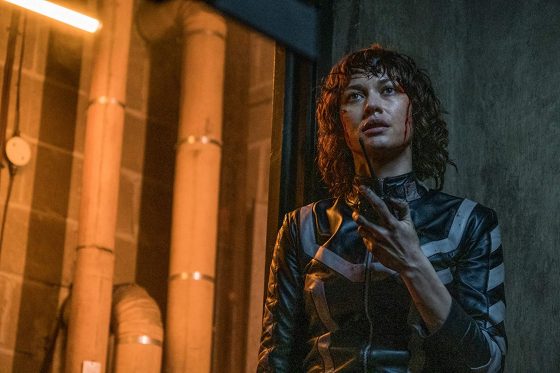 Olga Kurylenko gets the chance to get her John McClane on in the new action movie The Courier, which is now in select theaters and Video on Demand.

Kurylenko stars in the title role as The Courier, an unnamed former black ops operative who now makes black market deliveries on her motorcycle.  Her most recent job sees her delivering a secure video link to an international task force safe house so that a witness, Nick (Amit Shah) can testify against vicious crime boss Ezekiel Mannings (Gary Oldman).  The delivery is a setup but The Courier manages to get Nick out safely but the duo becomes trapped in a parking garage with a team of mercenaries lead by the psychotic and corrupt FBI agent Bryant (William Moseley).  The movie takes place in real-time and the pacing is fantastic and relentless.  It’s a classic Die Hard situation and while the location of a parking garage was probably used for budgetary reasons, the movie does a great job of coming up with new and interesting things to do in that location.  There’s lots of stuff here for old school action fans, including some great fights, cool kills, and solid shoot-outs and Olga Kurylenko is a cool, bad-ass action hero with a sarcastic sense of humor and lots of ways to smartly take out the mercenaries with whatever is lying around.  The movie also looks and sounds better than a lot of other recent DTV action movies.  It doesn’t look cheap despite the main location and there’s some clever bits with the soundtrack as well, like incorporating Gary Oldman’s opera records into the electronic score and then having the score “skip” when the record is skipping.

Unlike, say, Bruce Willis, Gary Oldman seems physically incapable of phoning in a performance and he’s great here even though he doesn’t have much to do except wander around his New York penthouse and listen to opera.  He’s got an eyepatch, which is great, and he has a couple of fantastic shouty scenes, like yelling at his daughter Alys (Calli Taylor) for prematurely opening a bottle of champagne to celebrate the death of the key witness against them.  William Moseley gives really fun, unhinged performance as well as Bryant, who is essentially the Hans Gruber of the movie, albeit a Hans Gruber who has completely snapped and is constantly popping pills and threatening The Courier over the parking garage’s loudspeaker.  None of the other villains are that memorable but they all fit into the archetypes of old school henchmen, like The Sniper, who is an icy specialist brought in to hunt down The Courier and Nick.  Speaking of Nick, Amit Shah seems to be trying to fill the niche of nervous action sidekicks, because he played the exact same role in the Dave Bautista movie Final Score but he’s fun in the role and he has some solid back and forth with Kurylenko.  Dermot Mulroney is also in the movie but he really has so little to do that he’s almost not even worth mentioning.

The Courier is a solid and fun old school action movie that is definitely worth checking out if you’ve been looking for a new “Die Hard scenario” movie.  Olga Kurylenko is a cool and bad-ass action hero and Gary Oldman makes the most of his limited screen time.  The movie is in select theaters and Video on Demand now.