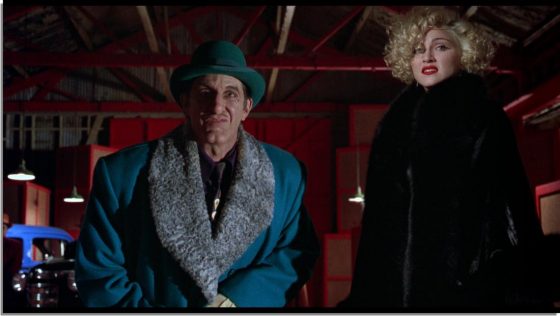 Warren Beatty’s Dick Tracy was poised to be the biggest movie of 1990 with a marketing campaign that rivaled what had come just a year earlier with Tim Burton’s Batman.  There were fast-food tie-ins, toys, comics, games and not one, not two but three different albums inspired by or related to the movie.  Obviously, with Madonna co-starring as Breathless Mahoney, there was going to be some sort of song from the Queen of Pop but Madonna put out an entire album called “I’m Breathless” that featured one of her biggest hits of all time, Vogue, and also had the backing of her Blonde Ambition Tour, where songs from the movie and Dick Tracy dressed back-up dancers would appear.  She also worked with the legendary Stephen Sondheim for the song “Sooner or Later” (which won an Oscar) and David Fincher directed the music video for “Vogue”.  The other albums were the score from Danny Elfman, who couldn’t quite reach the levels of his Batman theme, and another soundtrack album that included the likes of KD Lang, Al Jarreau, Erasure and…Ice-T(?).  Check out some of the songs from all the different albums below.

Musical Montage: Roxette “It Must Have Been Love”