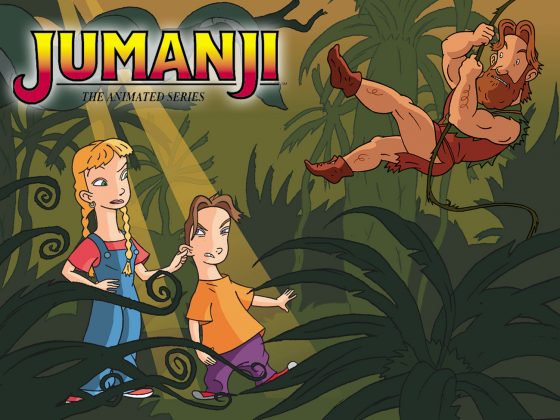 The new Jumanji crew returns this weekend with Jumanji: The Next Level but back in 1996 the original characters from the movie returned in a new (and, to be honest, kind of ugly) form with UPN’s animated series based on the 1995 movie.  The show was based on the movie but it wasn’t a sequel or continuation but more of an expanded retelling of the storyline.  Judy and Peter Shepherd move into a new home with their aunt and they discover the board game Jumanji in their new home’s attic and, upon starting to play it, they are sucked into the jungle world of the game and meet Alan Parrish, who has been trapped in the world of Jumanji since 1972.  Alan is trapped in the jungle world of Jumanji until he solves the clue he received in his original turn and Peter and Judy vow to help him solve it to allow him to escape the game while dealing with various threats and challenges each episode.  The animated series actually shares a few similarities to the new Jumanji movies, as it takes place inside a jungle world created by the Jumanji game and expands the cast of characters to include other, usually villainous, residents of the world.  The voice cast included some heavy hitters including Tim Curry, William Sanderson, Charles Napier, Dabney Coleman, Ed Asner, and Jim Cummings and was animated by Adelaide Productions as their first series.  Adelaide would later go on to create shows like Men in Black: The Series and Godzilla: The Series and Jumanji aired as part of UPN’s UPN Kids block with shows like The Incredible Hulk, Iron Man and the Bureau of Alien Detectors for its first two seasons and the third and final season was aired in syndication.  You can check out the entire first episode of the series, titled “The Price”, below.