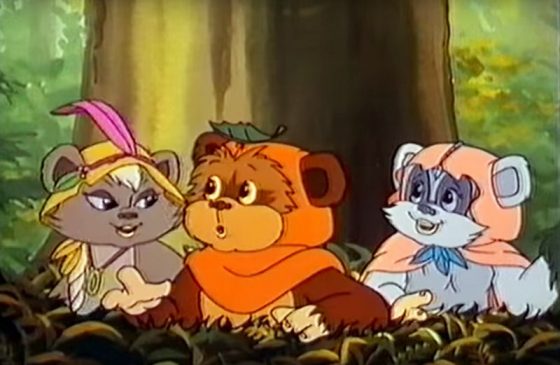 Long before Baby Yoda, the cutest things in the Star Wars universe were the teddy bear warriors known as the Ewoks.  Debuting in Return of the Jedi, Wicket and his furry friends got two more live-action TV movies, Caravan of Courage and The Battle for Endor along with an animated series that aired on Saturday mornings in the mid-80s along with Droids.  Star Wars: Ewoks debuted on ABC in 1985 and lasted for two seasons until 1986 with 35 episodes total, although the second season episodes were shrunk down to 15 minutes as opposed to the first season’s normal 30-minute episodes.  The show was set before A New Hope and followed Wicket (voiced by Jim Henshaw and then Denny Delk) and his friends Teebo, Latara and Princess Kneesaa as they learned the ways of the forest and their tribe while battling other, evil, residents of Endor, like the Duloks, Morag the Tulah Witch and Master Logray.  Eventually, agents of the Empire started to arrive as well as the planet was sought out as the home of a shield generator for the Second Death Star. The animation style was similar to Droids, which was somewhat similar to the animated segment featuring Boba Fett from the infamous Holiday Special, and Wicket and his friends all spoke in English (or Basic) on the series while in the live-action movies they spoke Ewokese, which is a series of grunts and growls. One notable name behind the scenes of the show was none other than the legendary Paul Dini, who would later be one of the forces behind Batman: The Animated Series and other DC animated properties.  You can check out the first episode of the series, The Cries of the Trees, below.

Everything Action Theater: Santa vs The Snowman