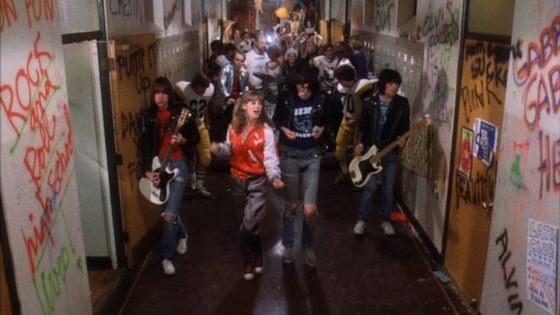 Produced by Roger Corman, 1979’s Rock n Roll High School was a musical comedy that revolved almost completely around the Ramones and arguably their biggest fan, Riff Randall, played by PJ Soles from Stripes and Halloween.  Riff goes to Vince Lombardi High School, where the students’ love of rock music and rowdy behavior is constantly driving away principals.  Riff waits for three days for tickets to a Ramones concert in town with the hope of giving Joey Ramone a song she wrote called “Rock n Roll High School” but the evil new Principal Togar takes away her ticket.  Principal Togar and a group of parents plan to burn rock records because of their bad influence but Riff and the Ramones (who arrive via radio contest) take over the school with the students.  Along with the usual Ramones hits like “I Wanna be Sedated” and “Blitzkrieg Bop”, the band does perform the title song in the movie.  The song appeared on the Rock n Roll High School soundtrack but didn’t chart except in the UK and later appeared on the 1988 Ramones Mania album.  Check out the song below.