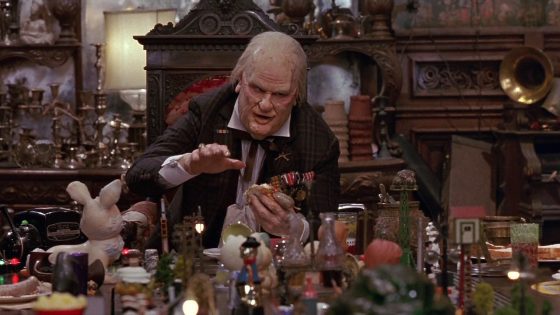 There are many inexplicable things in Dan Aykroyd’s 1991 film Nothing But Trouble from grotesque monsters to John Candy in drag and “Mr. Bonestripper” but one of the strangest might be the appearance of Digital Underground, who appear as themselves in the movie.  Chevy Chase and Demi Moore star as a financial publisher and lawyer respectively who end up the bizarre town of Valkenvania off the NJ Turnpike.  The town is run by the disgusting, 106-year-old Judge Valkenheiser (Aykroyd), who kidnaps the couple as punishment for their “crimes” and eventually forces Chase to marry his granddaughter Eldona (Candy).  Digital Underground is caught in the same manner as Chase and Moore but they perform “Same Song” for Juge Valkenheiser, who is charmed by the group’s performance and even asks them to perform at the upcoming wedding.  Digital Underground made a music video for the song, which appeared on the movie’s soundtrack as well.  The song and movie appearance is notable because it features a young Tupac Shakur, who was a member of the Underground early in his career before he went solo.  Dan Aykroyd, Dr. Dre and Eazy-E appear in the video as well and you can check it out below.