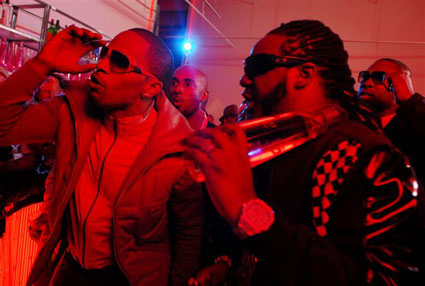 Along with being an Academy Award-winning actor, Jamie Foxx has also been an extremely successful R&B singer as well and one of his biggest hits came off of his 2008 album Intuition, “Blame It”.  Featuring T-Pain, “Blame It’ is a club jam about how people in clubs might be doing things they normally wouldn’t and then “Blame it on the A-a-a-a-alcohol”.  The song hit #2 on the Billboard Hot 100 and was the second-longest #1 in the history of the R&B Billboard charts, staying on top for 14 weeks.  By 2008, Foxx had established himself as a movie star as well as a singer and he was able to pull in a bunch of famous friends for the music video (which was directed by Hype Williams), including Jake Gyllenhaal, Samuel L. Jackson, Quincy Jones, Bill Bellamy, Mos Def, Forest Whitaker, Cedric the Entertainer and…Ron Howard?  The song also won the Best R&B Performance by a Duo or Group with Vocal Grammy at the 52nd Grammy Awards.  Check out the video below.

Musical Montage: Ray Charles “In the Heat of the Night”