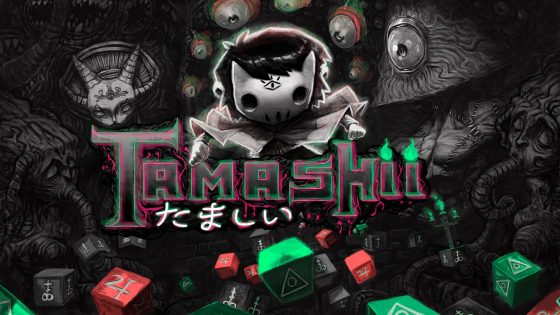 Typical platform and puzzle games are usually geared towards family-friendly settings and cheerful characters, but Vikintor, Stage Clear Studios, and Digerati take the genre to a twisted place for a mature audience. Tamashii is a puzzle platformer that features classic game mechanics with heavy satanic imagery. The game is dripping with horror elements that kept me locked in the game every creepy step of the way.

When a super nature entity needs help cleaning up a sacred temple, it spawns an emissary to do it’s bidding. Players take up the role of the nameless emissary, who must venture deep into a temple and rid the mysterious corruption within its chambers. Blocking each chamber are wandering demons, traps, and boss fights, all of which must be cleared out to unlock more of the temple.

The emissary can perform the basic jump and double jump, and along with the ability to spawn statues. There are special spots to use the statues as place holders to open up doorways, summon platforms and other actions to help. These statues have a time limit and have to be quickly dropped to set up a combination of moves successfully. This is where the puzzle mechanics kick in, and players will have to figure out when and where to place statues while trying to avoid death traps. 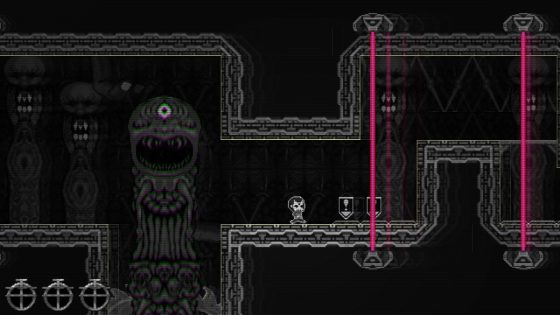 However, death isn’t so easy to avoid in Tamashii, but it isn’t permanent (Thank Satan?). Some puzzle rooms have obvious dangers that will test patience levels. Bumping in enemies, falling on spikes or getting caught in a laser beam explodes the emissary into chunky pixels. Respawn takes only a few seconds and it drops the player into the nearest safe space. This gives the game some relax room to take on the dangers without a ton of fear and regret about messing up the puzzles.

The highlight of the game is the beautifully haunting visuals. There are bizarre humanoid figures, floating body parts, and demonic creatures that add some shock value to the gameplay. There are inspirations from movies and comics in the designs, but I got a sense of Earthbound vibes from the backgrounds. 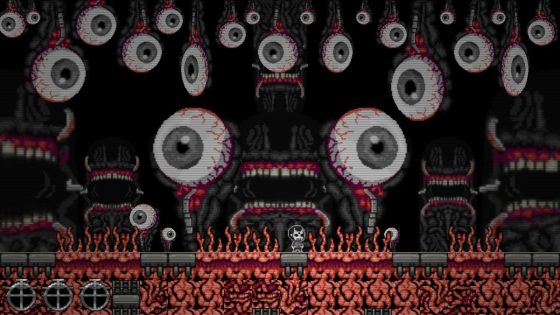 The art style is simple but effective in giving off a creepy sensation. The black and white tones allow the colors to pop without being too much of a gore factor. For all the horrific things going on screen, the devs hold back on showing blood and guts. However, you try staring at dead-eyed eyeballs for a while and feel great inside.

Overall, Tamishii is a great title for a mature gamer that enjoys tight platforming and eerie aesthetics. The game offers some reply value with options to change boss fight difficulty and time trials. The gameplay is tightly focused on the small mechanics and offers a good challenge to test some skills, so it’s worth checking out if you need something dark and twisted to play. Tamishii is available now on Steam, Switch, Xbox One, and PS4.