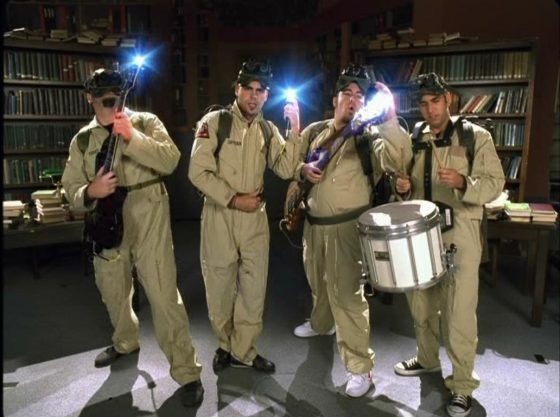 Probably best known for their cover of Michael Jackson’s “Smooth Criminal”, which was a #1 hit, Alien Ant Farm had a few other notable tracks, including the single “Movies”.  Using the world of film as an analogy for a bad break-up, the song was the first single off the band’s “Anthology” album in 2001 and then re-released after “Smooth Criminal” exploded but it couldn’t follow up that song’s massive success, peaking at #18 on the Billboard Modern Rock, although it managed to stay on the chart for longer than “Smooth Criminal”, lasting 32 weeks.  There were three versions of the music video for “Movies”.  The first was a behind the scenes style music video, the second was the band playing at a house party and imagining interactions with various girls and the third, and the one featured below, was a big-budget video that came out after “Smooth Criminal”, which featured the guys from Alien Ant Farm jumping into a movie screen and reenacting scenes from films like Ghostbusters, Willy Wonka and The Karate Kid (with a special guest appearance by Pat Morita).  Check out the video below.