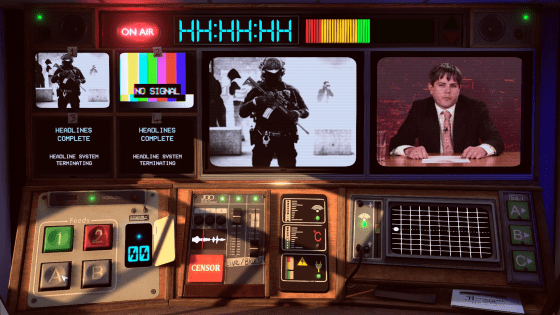 The holiday season gave us a vacation to recharge ourselves for the new year, but we’re back with a full column of games we played in the past few weeks. In this edition of Gamebox 2.0, we controlled a nightly news broadcast, lead a brigade of heroes, played a fantasy classic with Eddie Marsan, and few others in this collection of game reviews.

Not For Broadcast (Zach): Coming from NotGames and tinyBuild, Not for Broadcast puts you at the controls of a nightly news broadcast in an alternate history UK in the 80s.  A radical new government called the Advance Party has been elected and the new dual Prime Ministers put forth several sweeping changes, including massive wealth re-distribution, restrictions on travel and “transition centers” to help senior citizens die quickly and painlessly.  There’s clearly something sinister behind the scenes but it’s mostly just hinted at in this first chapter of the game as you’re mostly editing completely hilarious and utterly ridiculous segments.  From a bizarre sport called Sportsboard to a terrible preview of a musical about bullying, your job is to man the control board and make sure the broadcast goes smoothly.

Your main tool is the four camera buttons.  Your priority is on whatever the main subject is, usually the person talking, but you have to determine when to cut and choose different angles to keep the viewers engaged.  You also have to censor any bad language that gets spoken before it reaches the broadcast thanks to the live delay and deal with interference so the viewers at home don’t lose the broadcast.  It seems daunting at first but once you figure out the basic flow, you’ll find yourself doing certain tasks as second nature but it’s still pretty tricky to figure out when to make cuts, especially as the segments get more elaborate.

The game throws in lots of different scenarios to keep things interesting, like having to avoid showing naked protestors at the Sportsboard championship or avoiding electrocuting yourself as pieces of your equipment short out during a lightning storm.  The segments are all full FMV and they are all fantastically acted and written and you get to know characters like anchors Jeremy Donaldson and Megan Wolfe as you progress through the broadcasts, especially when they are off-camera during commercial breaks or before the broadcast starts.  In between broadcasts, there are some Choose Your Own Adventure-style text segments that focus on the effect of your job and the new government on your family.  As the story progresses, it seems like you are going to be making some moral choices about whether you do as the government says or putting things on air to tell the truth but this first chapter seems like it’s really just trying to introduce the mechanics and set things up story-wise for later.  Not for Broadcast is an extremely unique, hilarious and fun simulator that really pushes your multitasking abilities and gives you a greater appreciation for how live TV and news gets made. Definitely check it out now on Steam.

Bookbound Brigade (Chris): When the Book of Books containing the spark of the literal world is stolen, the idea of stories are doomed to fade away. Iconic characters, historical figures, and legends of myth team up as the Bookbound Brigade to restore the book before their world is lost. Developed by Digital Tales and published by Intragames, Bookbound Brigade is a 2D action platformer following in steps of the Metroidvania genre. It features traditional mechanics that players would come to expect from a Metroidvania title and introduces an interesting team dynamic to mix up the gameplay.

The setting of Bookbound Brigade takes place in a great library known as the Librarium Infinitum, a host realm to all the stories of past and future. Librarium Infinitum acts as the main hub for the Bookbound Brigade to explore five levels to hunt down the scattered pages from the Book of Books. There are five areas to explore, each themed from famous stories and are filled with puzzles, traps, and boss fights to take on. Areas are designed to be explored and revisited once certain characters and abilities are unlocked. 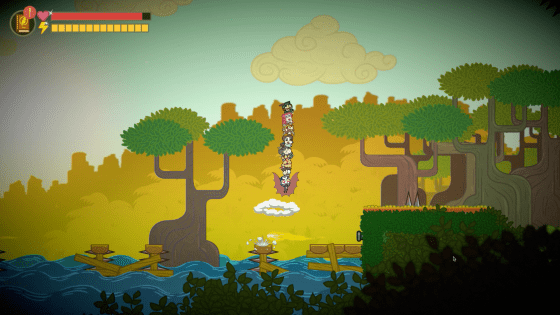 The game presents not just one protagonist to control, but eight. The player control heroes of fable and facts to move and attack as one unit. Each member of the brigade has its own upgradable stats and special skills that add to the total abilities of the unit. For example, King Arthur carries a sword to use in battle, Dracula has the ability to fly, and Nikola Tesla can shoot bolts of electricity. The brigade arranges itself in different formations to perform certain moves and actions. These formations allow the brigade to navigates cramped areas and strike at hard to reach foes.

Bookbound Brigade has a charming premise that playfully pokes fun of literary characters. There are silly dialogues and fun character animations that accent the jaunty tone of the game. The game’s strongest aspect is the formation options and the delightful hand-drawn artworld. The worlds have a bouncy, animated feel that has a wholesome appeal. Bookbound Brigade offers a decent challenge for its length, with a few repetitive and frustration selections, but it is a fun experience to try. Bookbound Brigade is now available for PC, Nintendo Switch and Playstation 4.

Deathtrap Dungeon: The Interactive Video Adventure (Zach): Ian Livingstone’s Fighting Fantasy novel Deathtrap Dungeon is one of the most beloved entries in that series and has previously been adapted numerous times into digital versions, including a more action/platformer version of PS1 and digital versions of the book for mobile and PC.  The latest version of the book features actor Eddie Marsan, who is basically acting as your private dungeon master as he narrates the story of the book to you.  You’ll have to make choices and fight enemies while gathering items scattered around the deadly dungeon of Fang and keeping an eye on your various stats. 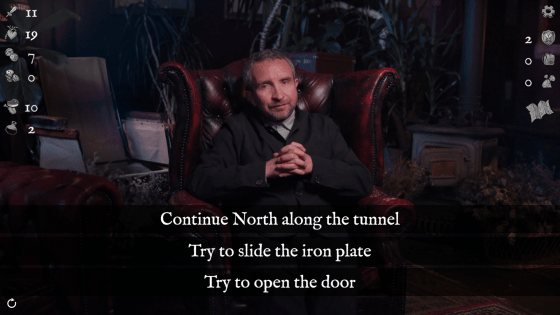 Battles and encounters with traps and obstacles are dealt with by rolling dice and they are usually tied to one of your stats, like Luck for instance.  You usually need to roll under your current number for that stat to succeed at whatever challenge you face and you need to out roll your enemy opponents to score hits on them.  Marsan does an amazing job of drawing you into the world of Deathtrap Dungeon and you also get to see the original book artwork when it’s applicable as well.  There’s not really that much gameplay-wise but if you’ve never experienced a Fighting Fantasy novel before, this is a great and simple way to get into their fantastical world with a great actor leading you along. It’s out now on Steam.

Nom Nom Apocalypse (Zach): Nom Nom Apocalypse released this week on Steam from Deadleaf Games and it’s a rogue-like twin-stick shooter where you have to battle an army of vicious mutated food.  A plate of mutant muffins explodes a diner and start devouring other food like burgers and fries, becoming hideous monsters that are destroying the world.  A group of food fighters rises to stop them, including a former hot dog vendor and a delivery boy.  Each character has a different perk and special ability and there a ton of extra characters to unlock as you progress.  You play from a top-down perspective using the left stick to move and the right stick to aim.  You have to clear each section of the level of enemies and then proceed, moving toward a boss battle with a massive mutant food.  You can collect different weapons along the way and you can also purchase perks after each run that will give you a boost at the start of your next run.  Like most rogue-likes, if you die, you lose everything you collected from that run except your money and perks and will have to start a new run to try and make it through the level. 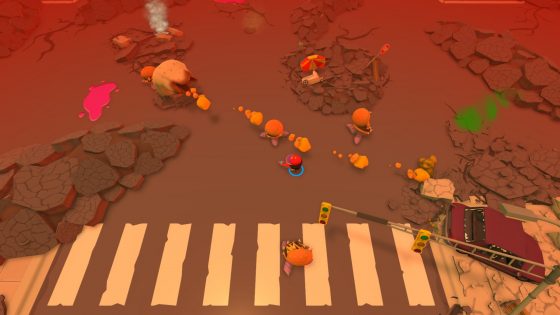 The game has a fun cartoon look and the mutant food monsters are all creatively designed but the game doesn’t really do much beyond what you would expect from the genre.  If you’re looking for something new to play in the genre, Nom Nom Apocalypse is solid and will probably satisfy your rogue-like craving but if you’re sick of the genre or looking for something that does something new or interesting, you may need to look somewhere else.

Metal Unit (Zach): Heavily inspired by anime, Metal Unit arrived in Early Access on Steam early this month from Neowiz and JellySnow Studio.  You play as Joana, the pilot of a Metal Unit mech suit that is fighting an alien threat to humanity that arises when a massive earthquake rocks the planet.  The game is a 2d action platformer that seems to have a sort of Metroidvania feel to it.  You have a melee and ranged weapon as well as various special weapons and equipment and you find different weapons as you proceed, allowing you to customize your loadout how you see fit.  You proceed through the world into different areas and you have to clear out all the enemies in the area to proceed. 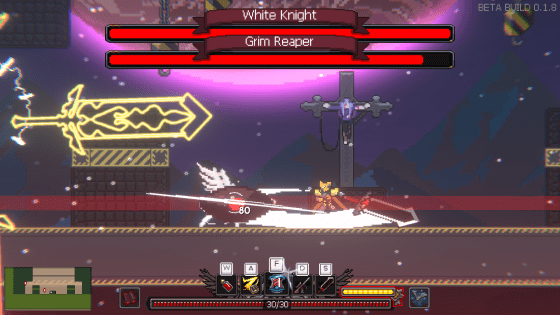 The enemy design struck me as a little strange as your Metal Unit as a cool and serious design but a lot of the enemies are goofy Dragon Warrioresque slimes and other cutesy creatures, which seems at odds with the serious story being told with overly dramatic anime cutscenes.  There are some more serious looking and dangerous looking enemies as you progress but it’s still a bit weird.  The game has a great feel and combat and movement is fast and accurate.  You have a dash ability that can let you dodge attacks and environmental hazards, which you definitely need to master, and you can build up a devastating special attack that can wipe out a ton of enemies in one shot.  The game also has some rogue-like mechanics, like if you die, you lose all your equipment but it gets converted to research points you can use to unlock new skills and items that will probably help you progress farther.  Metal Unit is a solid and fun action game that has a few strange quirks but is overall definitely worth checking out on Steam for fans of fast action and anime-inspired storytelling.