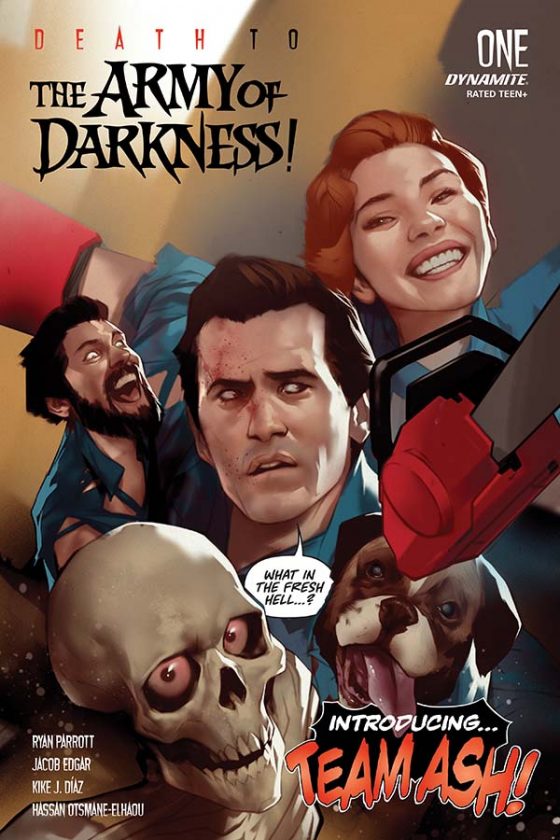 The Army of Darkness has come for Ash Williams once again, and this time Ash has some personal back up. It has been sometime after Ash William’s time-traveled to the past and defeated the Deadites. He now spends his time working at S-Mart while keeping an eye on the Necronomicon Ex-Mortis. However, a surprise attack by the Deadites drives Ash to find a way to get back a normal life. While Ash tries to break his ties to the Necronomicon, dark forces have come to claim Ash’s soul while new strange faces arrive to help.

Death To The Army of Darkness is set as a spin-off from the 1992 cult classic Army of Darkness movie. Taking place after Ash returns from the Medieval Era, writer Ryan Parrott explores a more battle wearied version of Ash. Not straying too far from the original source, this Ash Williams is just as carefree and cavalier as ever, wanting nothing more than beers and a good time. But unfortunately, Ash’s bond to the Necronomicon brings trouble for everyone around him. Parrott runs with the idea that the only person that could help Ash is himself, in a strange way.

The artwork is handled by Jacob Edgar and colored by Kike J. Diaz. It has some inspirations from pop art, with cartoonish designs and bold coloring. Edgar gets all the right Ash Williams mannerisms, showing Ash as a bumbling fighter than a clever warrior. As well as sporting a solid chin depiction of a caricature of Bruce Campbell. Diaz keeps the tone very playful, with a bright color palette, especially when bits of blood hit the scene.

Death To The Army of Darkness #1 is a solid entry to give readers a thrilling new experience with the favorite fan anti-hero. Ash Williams and the rest of Team Ash are sure to surprise and shock as their adventure has just begun.