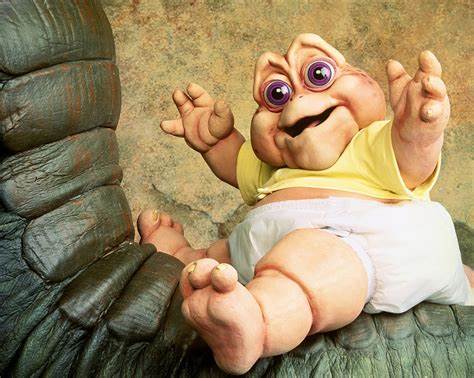 Although it’s more of a deeper cut pop culture reference today, back in the early 90s when it was airing, Dinosaurs was a massive hit on TGIF.  If you’re too young or have a bad memory, the show was produced by the Jim Henson Company and followed a dinosaur family named the Sinclairs through various sitcom situations.  Earl was the father, who worked pushing down trees, Fran was the mother and homemaker, Robbie and Charlene were the teenaged kids and Baby was the infant son.  Baby Sinclair, like Urkel before him, quickly became the breakout star and face of the series, with a variety of catchphrases like “Not the Mama” and “I’m the Baby, Gotta Love Me”, which became a song on the Dinosaurs music album, Big Songs.  Yes, alongside toys, games and more, Dinosaurs got a full music album and Baby Sinclair performed a song called “I’m the Baby, Gotta Love Me” that received a music video that aired during season 3 of the series and appeared on a various Dinosaurs VHS tapes as well. Baby is watching DTV and interrupts the programming to perform his own song.  Stuart Pankin, who voiced Earl on the show, actually wrote the song and it got a strange second life at Disney Tokyo in 1997 as part of the Roger Rabbit’s Toontown Hour show, where it is performed by Minnie Mouse with different lyrics related to cooking and eating.  Check out the music video below.