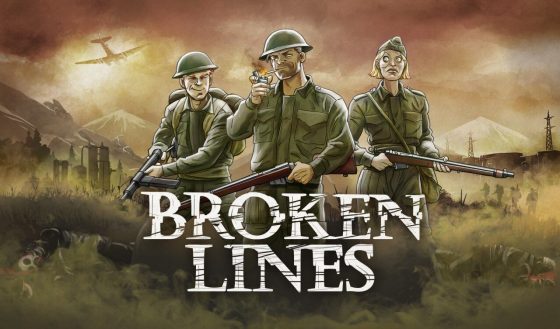 When a squad of soldiers finds themselves deep in enemy territory with no backup and no rescue, they are forced to make impossible decisions if they want to make it out alive. Developed by PortaPlay and published by Super.com, Broken Lines is a tactical RPG, set within an alternate history of WWII. The game focuses on a squad of soldiers, who are survivors of a plane crash. The squad is made of veterans and fresh recruits that have differences in how to navigate their situation. Tensions rise as the squad must work together against an army with sinister plans.

At first glance, the game resembles a typical WWII setting. There are 40s era weaponry, European landscapes, grizzled soldiers, and an oppressive army. But woven into the ambiance are some sci-fi elements that keep the escalates the narrative and the gameplay. It’s pretty cool how the game slowly introduces fantasy details without straying too far away from the historical setting.

A few characters follow WWII stock backgrounds, like the nervous greenhorn, the loner sniper, the team bully, and the optimistic hopeful. At the start, the squad is fracture about their purpose on the battlefield. These soldiers have relationship stats and composure levels, both of which can change depending on choices. There are chances to strengthen friendships or destroy them in certain situations. Through the game, the squad can pick which missions to undertake and find random encounters. Some missions make the squad scout for resources, weaken the enemy patrols or help the local villagers. Random encounters will quickly generate rewards or penalties offscreen. But each choice has consequences. Searching for ammo and food in an abandoned building might lead to a trap that injuries a soldier or produces enough resources to unlock new loot. 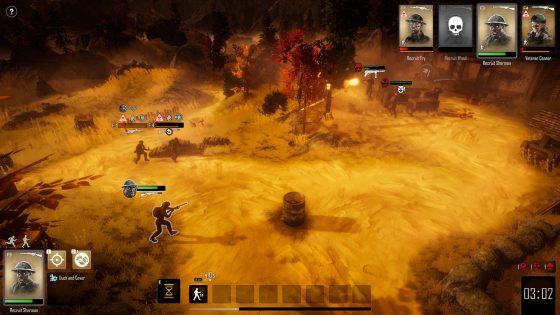 The gameplay relies on a mix of real-time and turn-based role-playing mechanics. Soldiers can be selected and moved in a static mode that lefts the player view the area in a limited fog of war window. The whole square can be moved and do actions around the battlefield like an RTS, but can only do so in 8-second intervals. The squad will automatically engage enemy combats, but will only perform special actions in when queued up on their next “turn”. This emphasizes smart tactics to navigate the area and fight enemies. Combat is very strategic, you can’t just move individual units and hope for the best.

Each member of the squad can carry rifles, machine guns, and shotguns, with a few special weapons and skills. Rifles have long-range attacks, machine guns can take on multiple combatants and shotguns can quickly mop up an enemy in seconds. Essentially each soldier can be customized and be fitted with all the same gear. No one soldier is just a sniper or a gunner. But balancing the gear and the soldier relationship is crucial to progress further in the game. Taking too much damage in combat will make a soldier lose composure, which will have them fire wildly and flee. An injured soldier or panicked soldier, if not treated, can be killed off or abandon the squad entirely. 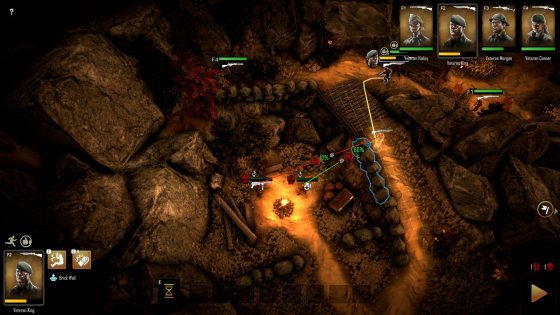 Broken Lines is an unexpected title that challenges players to be clever. The tactical elements are demanding in a fun way that makes the player focus on their every move. It takes two missions to understand the basics, but multiple tries to become an efficient squad commander. The gameplay isn’t very complex as similar titles, which makes it inviting for gamers looking to ease into a tactical experience. The fast-paced action and branching story keeps the game from feel dull and fresh each time you play. Broken Lines was released on February 25 for Steam and Switch.