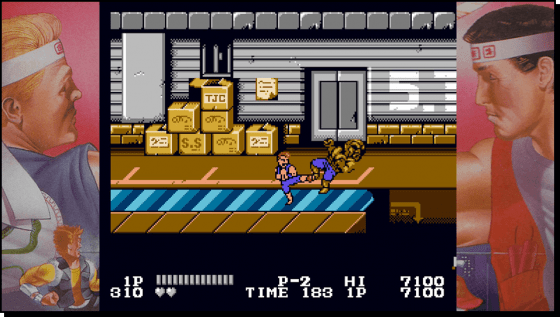 Like most everyone around the world right now, we’re staying inside and it’s a great time to catch up on some games.  We got to check out a collection of NES/Famicom classics, a great new roguelike side-scroller, a crazy party game and a tactical squad game that seems like a great entry point to the genre.  Check out our thoughts on all of them below.

Double Dragon and Kunio-Kun Retro Brawler Bundle (Zach): Coming from Arc System Works, the Double Dragon & Kunio-Kun Retro Brawler Bundle features all three NES Double Dragon games along with the Kunio-Kun series, of which we all only got four of in the US.  Most retro gamers have played River City Ransom but there was also Renegade, Super Dodgeball and, Crash’n the Boys Street Challenge.  Japan got a whole slew of other games in the series, all of which share the same art style, similar controls, and mechanics and there are hockey, soccer and basketball versions along with a track & field game, another brawler like River City Ransom called Downtown Special Kunio-Kun’s Historical Period Drama! that is set in feudal Japan and more. 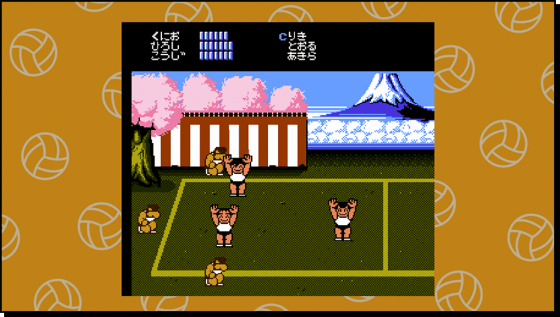 All of the games are either the NES or Famicom version of the game and you can play them in an enhanced mode with crisper graphics or their original glory.  There’s also save states and the whole game is set up very similar to the layout of the SNES or NES Classic.  There, unfortunately, isn’t a lot of bonus features or information besides the year the game was released and its description.  It would have been a fun bonus to be able to learn more about the games, especially all the Kunio-Kun games that are officially available for the first time in the West.  As far as gameplay goes, the games all play mostly how you expect them to but your enjoyment of stuff like Double Dragon III will all be personal preference.  The Kunio-Kun games, especially the multi-event games like Crash’n the Boys can be pretty esoteric as far as what you have to do in each mini-game, so it will probably require multiple playthroughs or looking up the instructions to figure out exactly what you need to do.  The controls mostly feel OK on either the PS4 version I got to check out and they’ve added a shortcut to the jump that required you to hit both buttons before on the NES or Famicom controller.  If you’re a fan of the Kunio-Kun series, this is worth checking out but if you’re new the series, I would suggest maybe trying something like River City Ransom or Crash’n the Boys before committing fully to the collection.

Spaceland (Zach): Coming from Ellada Games and developer Tortuga Games, Spaceland is a tactical RPG where you lead a squad of space rangers in battles against aliens who have attacked a remote station on an uncharted planet.  Inspired by games like X-Com, you control your squad and you have a certain amount of action points to spend on movement and attacking.  Each character is armed with a different weapon and have different skills and, like most tactics games, you have to figure out how to best use each character in each battle.

The game feels like it is definitely more forgiving than something like X-Com or even Mario and Rabbids and it might be a great intro for someone interested in but never really got into the tactical RPG genre.  The game has a fun, slightly cartoony art style and it offers up some fun challenges and different objectives besides just “wipe out all the enemies”, like having to blow up alien lairs with barrels or find a particular item or character.  You’ll find new characters as you progress and you can find material to craft upgraded weapons and armor for each character.  If you’re a tactics veteran, Spaceland might seem slightly basic or maybe too easy but if you find stuff like X-Com too intense or are a beginner to the genre, Spaceland is worth checking out on PS4 or Xbox One.

Skul: The Hero Slayer (Zach): Coming from Southpaw Games and Neowiz, Skul: The Hero Slayer arrived in early access on Steam last month and it’s a fantastic new roguelike side-scrolling action game.  You play as Skul, one of the few surviving members of the Imperial Army, which has been routed by the evil human army.  All of your fellow soldiers were killed or captured, so Skul is the only hope left to rescue the Demon King and defeat the humans.  Skul’s basic form sees him wielding a fellow skeleton’s leg bone like a sword and he can launch his head at enemies and then warp to it or run over and pick it up.  Along the way, Skul also finds new skulls which give him a whole new weapon and set of skills.  Skul can hold two different skulls at the same time and can switch back and forth, with a slight cool down before you can switch back. 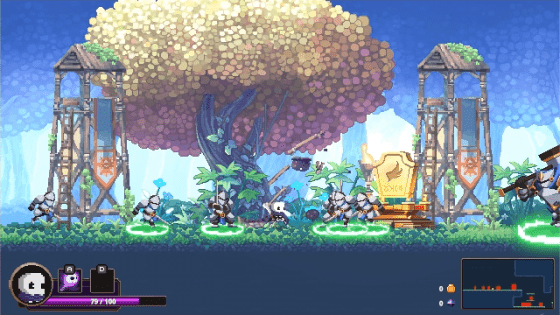 The game has a great pixel-art art style with lots of great variety to the enemies and environments and gigantic, amazingly animated bosses to take on.  Like most roguelikes, Skul is not an easy game and you’ll most likely die frequently.  If and when you do get defeated, you return to the ruined stronghold of the Demon King and you can talk to your only remaining ally, the Witch, who will also let you purchase and upgrade your abilities and stats with experience you earned in the prior run.  Combat is fast and feels great and Skul has a dash that is mandatory to master or else you are going to be pounded by enemies and there’s usually a ton of stuff going on at the same time, requiring you to stay on your toes to dodge attacks and get in your own strikes.  If you’re a fan of roguelike action games, Skul is worth checking and it looks and feels great for something that is in Early Access.

Billion Road (Zach): We got an early copy of Billion Road at PAX East last month and have been able to jump in before it releases on April 16th on Steam and Switch.  The game seems inspired by games like Mario Party along with more obscure cult classics like Top Shop or Fortune Street.  You compete along with friends or AI opponents and your goal is to make the most money in a set time limit by traveling around Japan, buying property and collecting various helper monsters, so there’s also some Pokemon action in here as well.  Much like the stars in Mario Party, one of the cities in Japan will be the goal and the players race to be the first one to reach it, earning a massive bonus and gaining some extra special monsters, one that will greatly benefit you and one that will punish an opponent.  The monsters all have different abilities and you need to figure out what combo of monsters will most help you at any given time.  There will also be times when giant enemy monsters arrive and you can send your monsters to help fight them.  If the enemy is not defeated before a certain time frame, it will attack and cause some sort of horrible effect on the game board or the players and their monsters. 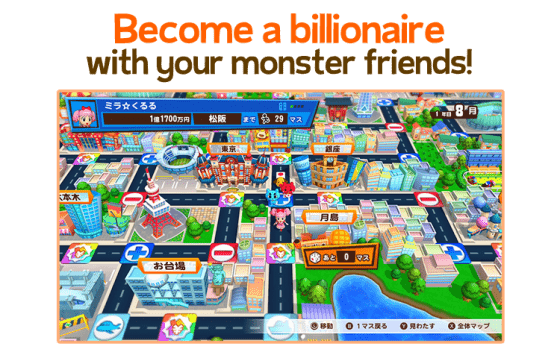 The whole game is also framed as a game show and there will be times when the hosts will cut in and award bonuses or have a player compete in a mini-game.  There always seems to be a ton of options on every turn, whether you use items, what route you take and whether you want to try and reach a ship or airplane shortcut.  You also have an entire property side of things to manage and you want to try and buy shops in various cities to add to your year-end bonus (each complete set of player turns is a month).  There are lots of different options for gameplay as well.  You can do a quick three-year game in Skirmish mode or go all out for a crazy 99-year game (a three-year game took me just slightly over an hour, FYI).  The game has a great, wacky art style with tons of personality and it’s bursting with color and fun details.  If you’re a fan of board game/party games, Billion Road is one to keep an eye out for when it officially releases next month.