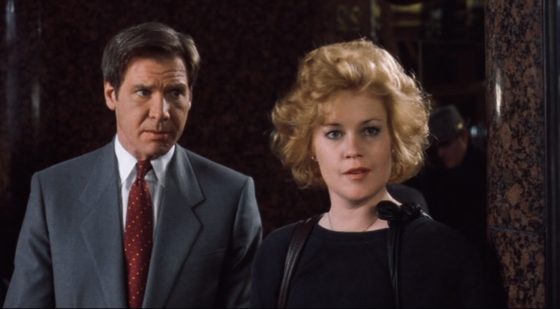 You probably most recently heard it during last year’s Castle Rock Season 2 as the favorite song of the young Annie Wilkes but “Let the River Run” by Carly Simon was originally from the 1988 romantic comedy Working Girl.  Directed by Mike Nichols, who directed classics like The Graduate and Who’s Afraid of Virginia Woolf?, Working Girl stars Melanie Griffith as the secretary to powerful stockbroker Katherine Parker, played by Sigourney Weaver.  When Sigourney is hospitalized after a skiing accident in Europe, Griffith’s Tess agrees to house-sit for her but then decides to take on Katherine’s identity to try and get ahead at the company and becomes romantically and professionally tied to one of Katherine’s fellow executives, Jack Trainer, played by Harrison Ford.  The movie was a huge hit and garnered multiple Academy Award nominations, including Best Actress, two Best Supporting Actress noms and Carly Simon won for Best Original Song along with a Grammy and Golden Globe.  Simon also wrote the score for the movie, giving her a “Music By” credit on the film.  The song was released as a single and peaked at 45 on the Billboard Hot 100.  The music video for the song mirrors the sequence from the movie where it is most prominent when Tess takes the Staten Island Ferry.  Check it out below.

Musical Montage: Phil Collins “Against All Odds (Take A Look At Me Now)”