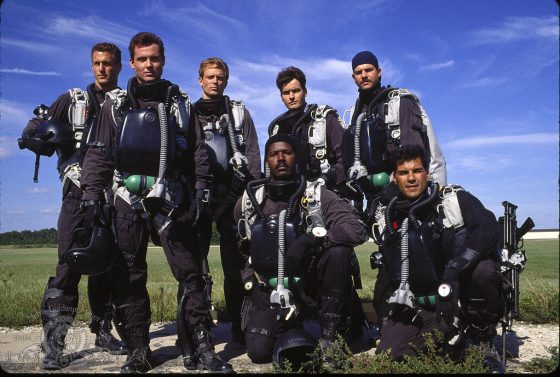 Coming out in 1990, Navy SEALs teamed Charlie Sheen and Michael Biehn together along with Dennis Haysbert, Bill Paxton, Rick Rossovich and others for some solid military action.  Sheen is Dale Hawkins and Biehn is James Curran and they are both members of an elite Navy SEAL team who are getting ready for the wedding of their team member Billy Graham (Haysbert) but the festivities are interrupted when the aircrew from the USS Forrestal is captured by terrorists.  Things get more complicated when the terrorist organization has seemingly gotten a hold of deadly Stinger missiles.  The movie was directed by Lewis Teague, who worked under the legendary Roger Corman before directing movies like this one, Cat’s Eye, Cujo, and Alligator.  Navy SEALs wasn’t very well received by critics and didn’t perform that well in theaters but it has performed better in the proceeding years on video, DVD, and Blu-Ray.  You can check out the entire movie below thanks to YouTube.