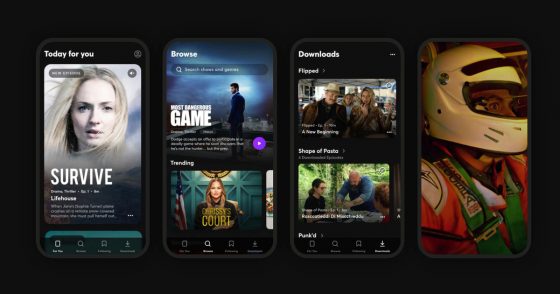 After lots of news about all the talent and money being thrown at the bizarre new streaming service Quibi, it finally launched this week to, at best, lukewarm reception.  The concept of a service only on your phone that is designed for daily commutes or waiting in line doesn’t make any sense currently with the ongoing pandemic and there’s also nothing on the service that is an absolute must-watch.  That being said, I have been checking it out for the last week, so read on to find out about the actual service and some of the shows on offer.

In case you are completely unfamiliar, Quibi is a new streaming service that is only available on mobile devices.  It’s available for Android and iOS devices and is available on tablets as well but phones are the main focus. Former Disney and Dreamworks executive Jeffrey Katzenberg is behind the project and there is reportedly over $1 billion invested into the service.  Right now everyone who signs up gets 90 days free but it will eventually (if it survives this first three months) cost $4.99 a month for a version with ads or $7.99 for an ad-free version. If the current free version is an indication, there’s really no reason to pay for no ads, there’s only 1 short ad that plays before each show and the actual episodes are not interrupted by ads during viewing.  One of the biggest selling points is the apps “turnstile tech”, which allows you to seamlessly view the shows in a vertical or horizontal orientation. There are actually two separate streams being sent for each show and the views are different as far as camera angles and focus. For example, if you are holding your phone horizontally and two characters are talking, you’ll probably be seeing a normal looking wide shot but, if you flip your phone vertical, you will most likely get a close up of whoever is talking and it will flip between the characters as needed.  The main difference between the two views right now does seem to be that vertical is much more close-up and, while you still get a good sense of what is going on, the traditional horizontal view seems much better for the type of content being delivered, especially the dramatic shows. The streaming quality seems pretty hit or miss, at least on my phone. Sometimes the shows look fine and in HD but other times the quality is pretty crappy. This is on my home wi-fi, where I can stream 4K HDR Netflix without any issues. You have the option to download the episodes for theoretically better quality but it looked about the same as just streaming the shows.

So what about the actual content itself?  A lot of it I have basically no interest in and I’ve only been watching about half a dozen or so shows regularly each day.  The shows launched with three episodes each and then there has been a new episode each day. Some of the shows are “Movies in Chapters” where each chapter is part of a larger, ongoing story while others are one and done episodes or what would be the equivalent of a normal half-hour show divided into three parts.  Here is a rundown and quick thoughts on what I’ve seen so far.

So overall, there was nothing that I saw on Quibi that was flat out terrible but there’s also nothing that even comes close to justifying paying a monthly fee and the orientation tech is fairly cool but it doesn’t really do anything particularly cool in any of the shows I watched.  A few of the shows I would be interested in if they were on an actual streaming service you could watch on your TV but they will lose every time against even the middle of the road offering from Netflix or Hulu, just because you can watch them on your TV. If people were actually still commuting or out and say, waiting at a doctor’s office or something, I could probably see the benefit of a something like this but given it’s weak initial launch download numbers, they probably should maybe delayed the launch for a while and it feels destined to be a MoviePass style disaster sooner rather than later.