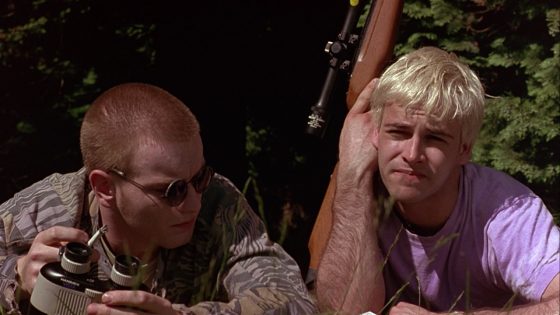 Originally coming out in 1977, Iggy Pop’s song “Lust for Life” truly exploded in 1996 when it was featured in the movie Trainspotting.  Written with David Bowie, “Lust for Life” comes off the album of the same name and it was a hit in the Netherlands and Yugoslavia at the time but the choice by Danny Boyle to include it in the opening of his hit film Trainspotting and on the soundtrack caused it to be rediscovered by audiences around the world.  Danny Boyle returned to the song for the sequel but with The Prodigy remixing the song.  After it’s inclusion in Trainspotting, the song appeared in other movies, TV shows and games and, probably most famously, as the theme for Royal Caribbean in its cruise commercials.  To go along with the new popularity and to tie into Trainspotting, Iggy made a music video that has clips from the movie along with him doing his usual high energy performing along with a group of similarly shirtless, similarly tight pants wearing men.  Check it out below.