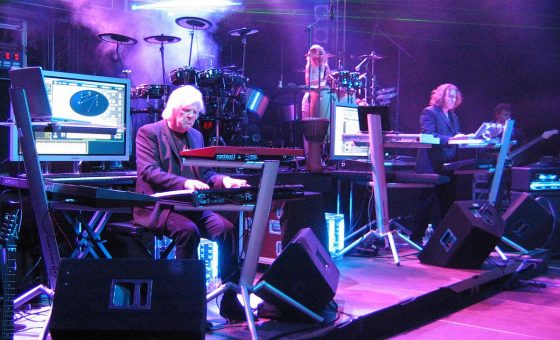 One of the coolest musical genres out there right now is Retrowave/Synthwave and all the artists like Carpenter Brut, Power Glove, Dance with the Dead, Le Matos, The Midnight and more all have to draw at least some inspiration from German electronica legends Tangerine Dream.  Formed in Germany in 1967 by Edgar Froese, the group has cranked out albums with different band configurations up until the present day (although Froese passed away in 2015) and has over 100 albums available at the present time.  The group gained a new level of international fame starting in the 1980s when they started to compose movie soundtracks, something that Froese had been very interested in pursuing since the 60s.  Their music first appeared on US televisions with the ridiculous vehicular action series Street Hawk but they also created scores for movies like Sorcerer, Thief, Legend, Risky Business, The Keep, Firestarter, and Near Dark and have continued into the present day with projects like Grand Theft Auto V.  Their music has also appeared in projects like Black Mirror: Bandersnatch and Stranger Things, whose composers Kyle Dixon and Michael Stein have said that Tangerine Dream is their main inspiration for their original music on the series.  You can listen to a selection of Tangerine Dream movie songs below.