*Note: Assemble Entertainment sent us an Early Access version of the game, and my review is based on the experience of the April edition.

When a nuclear disaster crumbles society, humanity had retreated to underground bunkers called “Endzones” to wait for the chaos to settle. Towns, cities, and countries have been destroyed and nature grew to take their place. 150 years have passed and humanity has emerged to rebuild. Now it’s up to a strong leader to take charge and shape the future of mankind.

Endzone – A World Apart is a new take on the city-building genre by developer gentlymad and publishers Assemble Entertainment and WhisperGames. Humans have to restart civilization after spending generations underground. Players take on the role of the unnamed leader, guiding a small band of people through a post-apocalyptic wasteland. Players will have to manage many aspects of the community. Resources need balancing, people need to be assigned tasks, and the settlement’s morality stable. It’s like being a tribe leader, a city planner and a life coach all wrapped up in one dusty blanket.

Luckily, starting up a settlement isn’t as archaic as figuring out how to invent fire. Some technology from the old world hasn’t been completely lost and the starting industrial production skills are decent. At the start of the game, all adult citizens can be assigned to any roles. Workers can be assigned to cut down trees and salvage scrap from ruins and gathering some basic water/food. Building up shelters, warehouses, and material refineries start up a fun economy to the colony. 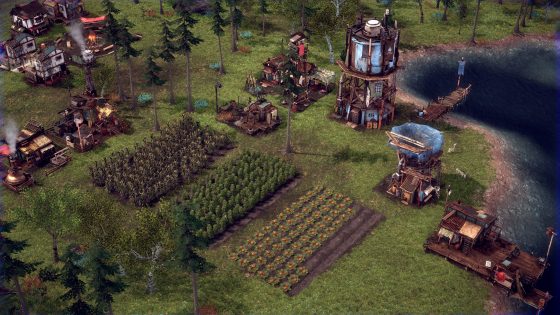 Constructor workers, woodsmen, salvagers, fishermen, and water caretakers all play a vital role in the settlement’s success, but at times must be placed higher or lower on properties when the situation calls for it. For example, during the spring and summer seasons when deers and fish are abundant, the need for hunters and fishermen is high. But in colder seasons, animals are scarce and the need for sustainable crops is in demand. It makes it easy to increase production or restructure resources with a few clicks and no waiting for a specific character with special traits.

Once the population increases, so do the demands. Every citizen adds a toll to the resources and all have a limited life span. A settlement that runs great with 40 people, can be a disaster if most of the citizens are elderly and can’t take care of the young. Families need to be started up to produce more citizens and expand the work on the settlement. Creating better living conditions and better equipment continues a healthy cycle, but it is no easy job. It only takes a short time to understand the basics of the Endzone after having a generation or two survive under good leadership. But its also really easy to lose hours of hard work when the environment attacks. 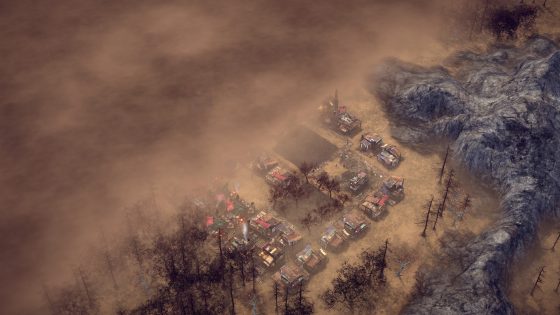 150 years of nature reclaiming the world has cleared up some of the nuclear fallout, but the atmosphere has a few punishing environmental dangers. Radiation has made difficult weather patterns that produce deadly sandstorms and unforgiving drought. Radioactively also plays a factor when looking at soil despots, placing buildings, and collecting rainwater. Sandstorms and droughts are basically the two worst enemies in the game. Sandstorms spread radiation around and damage buildings, and make the population sick. Droughts will dry up lakes, crops to wilt and increase the demand for water. Any of these events can dramatically throw a settlement into chaos. Sometimes the game will randomly space them out, but it can randomly combo environment events and completely ruin a settlement. 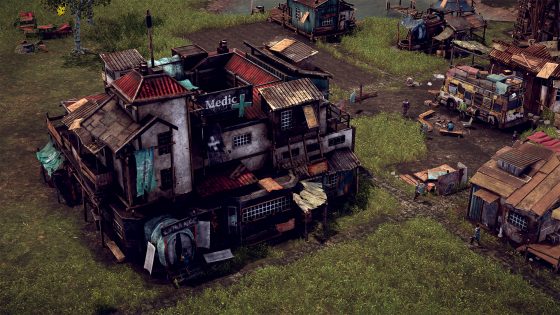 Although it’s a lot to handle at once, there is a fun and addictive rhythm to the gameplay once a settlement gets moving. Slowly increasing supplies while maintaining a healthy population is key to survive season after season in the new world. The game encourages the player to explore every option, and tosses in a few timed quest events to try to reach certain resource caps or population levels for rewards. It’s great to achieve these bonuses if the labor and productivity is available, but a few times the rewards will be missed. Some quest have little to no risk, but some can distract from maintaining balance at the settlement. In the April update, Expedition jobs were added to offer citizens to explorers and search the landscapes for items and new tech. It can greatly boost development on certain processes and adds a sense of world-building to the game.

Endzone offers a city build experience that mixes medieval and modern for a glimpse of humanity’s second chance. The game has great visuals for building structures that follow familiar post-apocalyptic tones and a bustling world that challenges the player to quickly adapt. There are some issues with notifications getting a tad annoying and constantly barrage the UI. The AI sometimes has trouble pathing around cluttered terrain and you can’t focus a worker to clear a specific location. There isn’t any personalities to the citizens, but Endzone concentrates more on the buildings and environments than the characters.

Overall, Endzone is a great simulation title that uses the post-apocalyptic themes well and offers challenging management mechanics. The dynamic ecosystem keeps the game from staying dull, constantly keeping the player on their toes for the first sight of troubles. It might take a few rounds to figure out the tricks and shortcuts to build a stable settlement, but disaster looms around every season. Since the game has a few development phases to go, there is room for more expanded components. Maybe there would like to see more settlement defenses and mutant wild life wandering about.