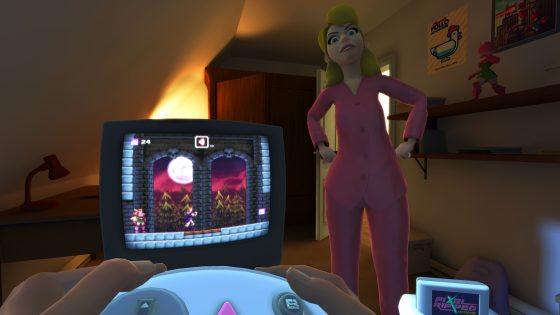 We’re all still mostly stuck inside but that means there’s time to check out a bunch of new games and this month we dove into the retro VR world of Pixel Ripped 1995, the Lovecraftian horror of Moons of Madness, the demonic brawler Obey Me and the Sega arcade classic G-LOC Air Battle.   Read on to find out what we thought of all of them.

Pixel Ripped 1995 (Zach): The sequel to Pixel Ripped 1989 from ARVORE, Pixel Ripped 1995 jumps ahead to the 16 and 32-bit era of video gaming in the 90s as you help video game heroine Dot stop a villain from the video game world who has gotten the power to affect things in the real world as well.  Needing the help of a human video gamer, Dot gets into contact with David, a 9-year old gaming whiz, and together they take on various challenges to save both worlds.  You are in the head of David and you usually have to use his gaming system controller to tackle the various situations in the game.  Some of them including having to distract your mom so she doesn’t stop you from playing the game or having to jump between two different games at the video rental store to have Dot bring items from one game into another.  The game has a great visual style, especially the retro-inspired games you’ll play through and there are tons of easter eggs and jokes to look out for fans who grew up in the 90s era. 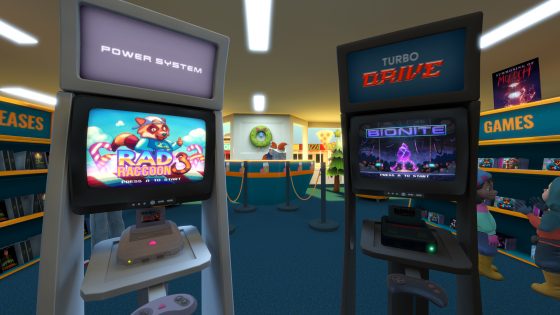 The game also features great, funny writing and some solid voice acting, especially characters like David’s dorky dad.  There’s a great variety to the games you’ll have to explore and the other situations you find yourself in and there are homages to Metroid, Sonic, Final Fight, Castlevania, and more.  The game is out for most of the major VR headsets, including PS VR, Oculus, and SteamVR and if you’re an old school gaming fan, it’s definitely worth checking out and reliving some of your memories of the console wars.

Moons of Madness (Zach): Combining sci-fi and Lovecraftian horror, Moons of Madness is a fantastic first-person horror game where you play as a member of a Mars expedition, chief engineer Shane Newhart.  A shuttle carrying a new crew is on the way but things start to fall apart as Shane loses contact with the other crew members and various areas of the base begin to suffer glitches and failures.  Working to fix them, Shane starts experiencing horrific visions and finds something terrifying has invaded the base.  The gameplay involves you traveling to different areas of the base, usually having to fix something to broken, and finding the items you need to complete the tasks.  The puzzle solutions are realistic and logical and they make you feel like you are really a member of a Mars mission and you have to remember to be diligent and aware of the proper procedures and steps for stuff like say, getting into and out of the airlock (protip: make sure you remember to switch the atmosphere from inside to outside or vice versa). As you progress through the story, you’ll encounter some classic Lovecraftian elements like unknown horrors brimming with tentacles, mysterious runes, and strange orbs with a strange power. 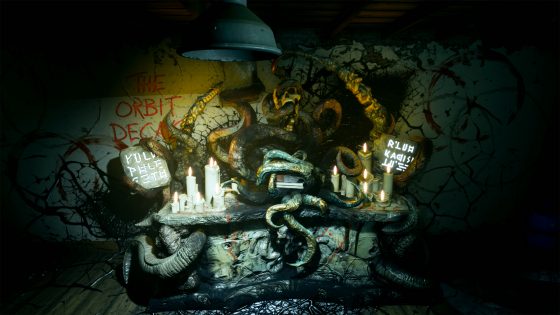 The game looks great and has a really great design with both the Mars landscapes and base and the cosmic horror locales you find yourself traveling to.  The game also features really solid voice acting and Shane is a much more chatty protagonist than other similar games.  As a bonus, if you’ve played Funcom’s Secret Worlds Legends, Moons of Madness takes place in the same universe, but it’s not necessary to play one to understand the other.  The game is about 6 hours long and it’s paced to really make you want to keep pressing on and see what will happen next.  It’s out on PC, PS4 and Xbox One.

SEGA Ages G-LOC Air Battle (Zach): The latest release on the Switch in the SEGA Ages series of classic re-releases by the emulation masters at M2, G-LOC Air Battle is the spiritual successor to After Burner and After Burner II that originally came out in arcades in 1990.  Created by the legendary Yu Suzuki, the big selling point in arcades (if they could afford it) was the R360 cabinet, an insane machine that could rotate on any axis 360 degrees, allowing players to actually experience barrel rolls and other maneuvers.  The SEGA Ages version of the game obviously can’t replicate that experience but there is a fun display mode that replicates the view from inside the cabinet along with a slew of other display modes for whatever your preference is when playing. 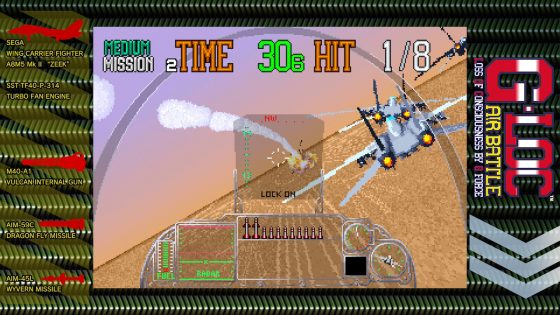 The game itself is a jet fighter action game similar to After Burner but played from inside the cockpit.  Each stage tasks you with taking out a certain number of targets, usually enemy jets but sometimes also land targets.  You have machine guns and a certain amount of missiles and the biggest gameplay mechanic to learn is to quickly target and lock on to enemy fighters, or else your missiles will fire and miss their target.  You sweep your reticle over the target and hold it until it locks.  You need to quickly lock on to multiple targets and take them out because you also only have a limited time limit to meet your mission’s target number.  There’s also a pretty cool feature where an enemy jet can lock onto you and the game switches perspective to allow you to try and shake them.  You can play the original arcade version or the SEGA Ages version, which adds more missiles, more enemies but the lock-on is much faster and you can more quickly hit multiple targets.  This is the first time the arcade version has been ported to a home console and, outside of the extremely rare chance to actually play the real cabinet, this is probably the best way to experience.  If you’re a fan of After Burner and never played G-LOC, it’s worth checking out, although it’s definitely slower and has a slightly steeper learning curve than the absurdly fast-paced action of After Burner.

Obey Me (Zach): We played Obey Me from Blowfish Studios and Error 404 Game Studios but the game is now out on PC, PS4, and Xbox One.  The game is a 3d brawler where you play as “Soul Huntress” Vanessa Held, who along with her Hellhound Monty works for Ammon, one of the Lords of Hell to take out troublesome demons or recover powerful artifacts.  As her latest job progresses, Vanessa and Monty get drawn into a bigger plot that could affect the entire war between Heaven and Hell.  The game is played from a top-down/isometric perspective similar to something like Diablo but its fighting system is more like a Devil May Cry, especially as you are ranked on your performance just like DMC after every combat encounter.  Both Vanessa and Monty can gain upgrades and Vanessa gets new weapons while Monty can transform into different forms and you can mix and match both characters’ weapons/abilities to find an effective blend for whatever situation you are in.

The combat is extremely engaging and it quickly gets complicated by an increasingly diverse range of enemies and various traps and obstacles like spikes, bounce pads, and exploding barrels.  These can really screw you up but you can also use them to your advantage to take out the enemies.  Along with your normal attacks, you can also build up a gauge on every enemy that you can use one of Monty’s abilities on to damage them and gain crystals that builds a gauge that, when full, lets Monty and Vanessa fuse into one powerful form for a limited time that can let you do some serious damage on bosses and bigger enemies or just clear out a large group of weaker enemies.  The game is also playable in co-op, with one player controlling Vanessa and the other controlling Monty.  The game also has a cool comic book art style and Vanessa and Monty have a really great back and forth dynamic. Some of the other characters have some iffy voice acting but overall the voice acting and writing is pulpy and fun and it feels a bit like the aforementioned DMC or something like Darksiders.  If you’re into brawlers with a wide variety of enemies and level layouts and some interesting combat mechanics, definitely check out Obey Me.