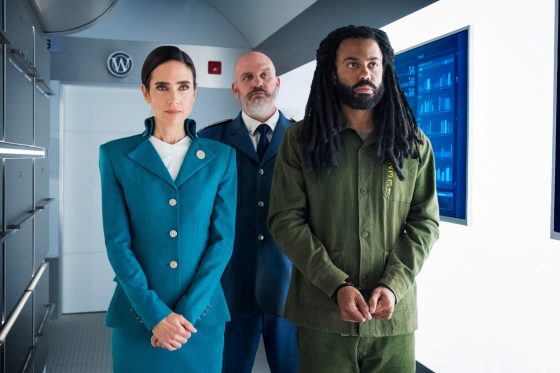 Before winning all the awards earlier this year for Parasite, Bong Joon Ho directed the 2013 sci-fi action movie Snowpiercer, based on a French graphic novel.  The rights were optioned for a television series in 2015 but it’s been a rough few years trying to get it developed, losing its original showrunner and switching networks multiple times but the show is finally debuting this coming Sunday (May 17th) at 9 pm EST on TNT.  (Review based on first 5 episodes of the series)

Snowpiercer the TV show is a reboot inspired by both the movie and the graphic novel but doesn’t feature any of the characters from the movie, although there are equivalents for most of them.  The setup is the same in that a climate disaster causes Earth to freeze beyond the point of sustaining life and the only remaining shelter is Snowpiercer, a train that runs on a perpetual track around the Earth built by the mysterious billionaire Wilford, with the show set 7 years into the train’s journey.  The train is divided by classes, with the stowaways who forced themselves on board relegated to squalor in the tail while the wealthy who bought tickets live lavishly in first class, with decreasing levels of privilege and lifestyle in between with second and third class.  Daveed Diggs plays Andre Layton, a leader in the tail who is recruited to help solve a murder that occurred further up the train due to his past as a homicide detective in Chicago.  Layton reluctantly agrees to help, mostly because he believes he can gain allies and intel that will help aid a revolt by the tail section.  Jennifer Connelly co-stars as Melanie Cavill, the “Voice of the Train” and the head of Hospitality, which maintains relations between the passengers and handles the day to day operations.  One of the strangest aspects of the Snowpiercer series is the overarching murder investigation.  The world is seemingly so rich with details and ideas you could explore but the way it’s handled here is so boilerplate and a lot of the supporting characters slot into crime show archetypes that make it feel like it could be happening anywhere and not specifically on a dystopian future train, like Mike O’Malley as the gruff chief or Mickey Sumner as Layton’s partner.  The show does explore some things further than the movie given the fact that you are spending 10 hours in the world as opposed to 2 with the movie and you get to see more of how the society of Snowpiercer works and more areas where people live and work.  The movie was totally from the perspective of the tail section and specifically Chris Evans but you spend equal time on the show with Layton and Melanie and both offer up insights into different parts of the train.  Another thing the show does better than the movie is to give a sense of the world before Snowpiercer.  The movie felt like there was never anything besides Snowpiercer but the show has little moments to remind you that these people were in a world similar to ours before the Earth froze.  For example, early on to entice Layton to become the “train detective”, he’s offered a simple meal of grilled cheese and tomato soup but Daveed Diggs absolutely sells the hell out of that being one of the most delicious things in the world after 7 years of eating cricket bricks.  Jennifer Connelly definitely has a more interesting role though as she plays multiple sides and figures out how to manipulate events to maintain the order of the train and the various politics of the different class groups.  The plotting of the tail section is also more interesting than the main murder plot and it’s fun and thrilling to see the tail section try to gather information or just barely get a key item without getting caught.  One strange element that does the show no favors though is that at times, especially in the first few episodes, there are shots and sequences lifted directly from the movie but they only serve to draw unflattering comparisons to film and specifically Bong Joon Ho’s tremendous sense of style and off-beat sense of humor.  Both of those are lacking overall with the show, which has a generally solid but generic sci-fi look and a grim and serious attitude that lacks the little offbeat moments the film had.

Snowpiercer the series is a solid show but it definitely feels like a watered-down, less ambitious version of the movie, especially with the generic murder investigation/crime show plot that dominates the series.  There are some interesting ideas and characters on the side and there’s enough from the movie here for fans of the movie to at least check out the first episode or so but it feels like a there’s a lot more that they could have done with such an interesting source to draw from.