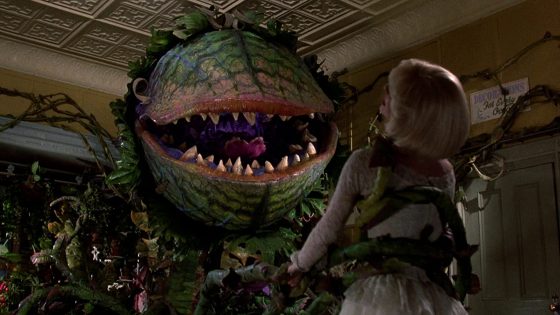 Originally a 1960 horror/comedy from the great Roger Corman (which featured a young Jack Nicholson), the most famous iteration of Little Shop of Horrors is the Frank Oz directed musical horror/comedy from 1986.  Based on the off-Broadway play from Alan Menken and Howard Ashman, which was based on Corman’s movie, the movie version stars Rick Moranis as lowly florist Seymour Krelborn, who discovers a mysterious plant he dubs Audrey II, named after his crush Audrey (Ellen Greene), who works in the florist shop with Seymour.  Seymour discovers that Audrey II feeds on human blood and reluctantly starts to give it blood from his fingers.  Audrey II grows to a massive size and, to Seymour’s shock, begins to speak (with the voice of Levi Stubbs) and demands bigger meals with the promise of giving Seymour everything he ever wanted.  The movie was well-received when it came out and has only grown more and more beloved as the years have gone on.  All of the songs in the movie were written and composed by Al Menken and Howard Ashman, who would later collaborate for Disney on movies like The Little Mermaid and Beauty and the Beast before Ashman’s tragic death in 1991. Check out most of the songs from the movie below.