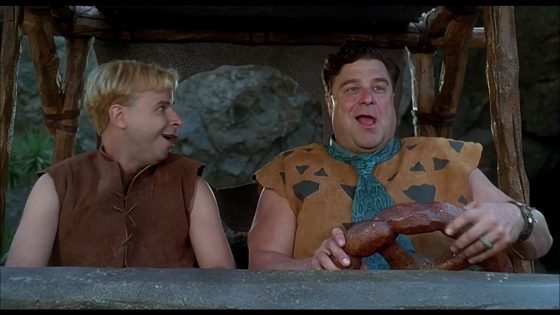 In the summer of 1994, there were few movies bigger than the live-action version of The Flintstones.  Starring John Goodman, Rick Moranis, Rosie O’Donnell, Elizabeth Perkins, Kyle MacLachlan, and Halle Berry, the movie was a gigantic smash hit, making over $340 million worldwide on a budget of $46 million, which would be over $590 million adjusted for inflation.  That success was despite negative reviews, which criticized the plot and some of the casting choices.  The movie was also a marketing juggernaut, with a full-court press of promotions and merchandising.  Probably most famously, McDonald’s went all in with their “RocDonalds” campaign, which saw the return of the McRib in a special combo meal, Happy Meal toys, T-shirts and collectible cups.  There were also video games, toys, and other merchandising.  MTV also got in on the action, with a block of their show The Grind filmed on the Bedrock set and saw dancers in cave outfits dancing to some of 1994’s hottest hits.  Speaking of music, the soundtrack was also a pretty big promotional tool as well, with the big selling point being two songs from The B-52s, who appeared in the movie as themselves, albeit with the punny new name of the BC-52s.  They performed the song “The Bedrock Twitch” (which was from the cartoon) while also putting their own spin on the iconic TV theme song “(Meet) The Flintstones”, which got an official music video shot on the Bedrock set with the entire cast showing up to play instruments or dance.  Check it out below.

Musical Montage: Guns N Roses “You Could Be Mine”