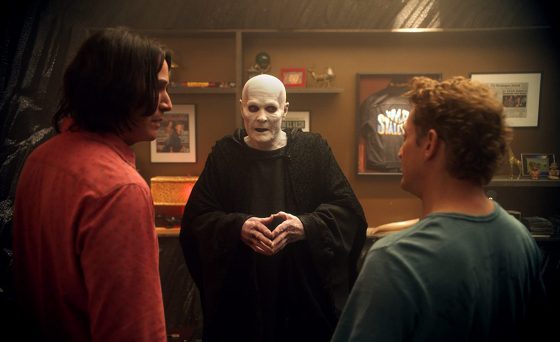 Everyone’s favorite time and afterlife hopping 80s duo Bill & Ted are finally back in the long-awaited third entry in the series, Bill & Ted Face the Music.  Despite their epic performance at the end of Bogus Journey, Bill & Ted (Keanu Reeves and Alex Winter) still have not come up with the song that will allegedly unite the galaxy in harmony and secure the ultimate future for humanity some 30 odd years later.  Put on notice by an impatient council from the future, Bill & Ted come up with a plan to use the magical telephone booth, travel to the future, and steal the song from their future selves.  Samara Weaving and Brigette Lundy-Pain star as Bill and Ted’s daughters respectively and William Sadler is back as Death.  Kristen Schaal, Beck Bennett, Kid Cudi, Anthony Carrigan, Jayma Mays, Erinn Hayes, and Jillian Bell co-star as well and Galaxy Quest director Dean Parisot is at the helm.  The duo looks as charming and funny as ever and hopefully, things will work out where it will be able to come out on August 21st in theaters.  Check out the trailer below.