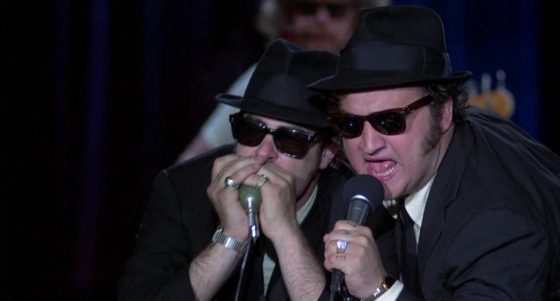 Celebrating its 40th anniversary this past weekend, the 1980s cult classic The Blues Brothers was absolutely jam-packed with music alongside iconic Chicago landmarks and over the top car chases.  Directed by John Landis and starring Dan Aykroyd and John Belushi as Jake and Elwood Blues, characters they had originated a few years earlier on SNL, the movie follows the titular “blood brothers” as they set out on a quest to reunite their band and raise money to save the orphanage they both grew up in.  Along with the actual members for the band, the movie featured musical legends like Ray Charles, Aretha Franklin, James Brown, Cab Calloway, and John Lee Hooker, who all had show-stopping musical numbers throughout the movie.  The Blues Brothers themselves also, obviously, performed throughout the film as well and their cover of the Spencer Davis Group’s “Gimme Some Lovin'” charted at #18 on the Billboard Hot 100 charts and the entire soundtrack album went platinum in the US and multiple times platinum in other countries around the world.  You can check out a bunch of the musical sequences from the movie below.

Musical Montage: Ray Charles “In the Heat of the Night”

Musical Montage: The Heights “How Do You Talk to an Angel”