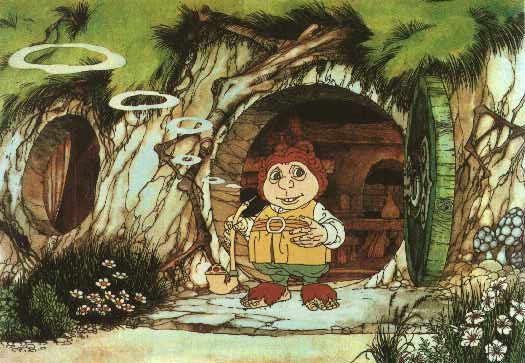 Nowadays if you mention The Hobbit or The Lord of the Rings, most people think of the Peter Jackson movies but back in 1977, there was the original animated adaptation of The Hobbit. Directed by Rankin & Bass, famous for their Christmas specials like Rudolph, the movie was animated by the predecessor to Studio Ghibli, Topcraft, and featured Orson Bean as Bilbo and John Huston as Gandalf.  The movie followed the main plot points of the book in a fairly abridged fashion but arguably more enjoyable than the bloated Hobbit trilogy from Peter Jackson.  Like other Rankin & Bass projects, the movie was filled with music, most of it coming directly from the text of the original Tolkien novel with one exception, “The Greatest Adventure (The Ballad of The Hobbit)” performed by Glenn Yarbrough.  The song repeats multiple times throughout the film and came back when Rankin & Bass adapted The Return of The King in 1980.  The song was also the inspiration for the Lemmiwinks song from “The Death Camp of Tolerance” episode of South Park, where lovable gerbil Lemmiwinks must journey through Mr. Slave’s digestive system.  You can listen to “The Greatest Adventure” below.