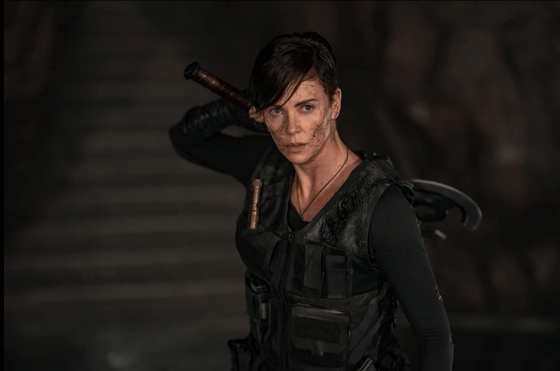 Netflix delivered some fantastic action earlier this year with Extraction and they’ve delivered again with the comic adaptation The Old Guard.

Based on the comics by Greg Rucka and Leandro Fernandez (Rucka wrote the screenplay for the movie as well), The Old Guard follows a group of mercenaries who have all mysteriously developed immortality throughout the ages.  Charlize Theron plays Andy aka Andromache of Scythia, an Amazonesque warrior who is thousands of years old and she’s joined by her crew of Booker (Matthias Schoenaerts), Nicky (Luca Marinelli) and Joe (Marwan Kenzari).  The team has taken jobs for hundreds of years based on what they believe will help humanity but Andy has grown increasingly disillusioned and is just returning from a long break at the start of the movie.  The team takes a job to rescue kidnapped children in Sudan but it turns out to be a trap by former CIA agent James Copley (Chiwetel Ejiofor), who has joined forces with greedy pharma CEO Steven Merrick (Harry Melling) to try and unlock the secret of the group’s immortality.  There’s also Nile Freeman (Kiki Layne), a Marine who becomes the latest immortal when she is “killed” in Afghanistan.  The plot is fairly straightforward with some cliche/stereotypical turns, like a third act betrayal, but the depth of the characters and the examination of immortality balances things out.  The Old Guard does a great job of establishing its characters and then continues to build them as the movie progresses and you really get the sense of history and familiarity between the team and Layne does a great job of being the audience surrogate and reluctant new immortal mercenary while Theron continues her reign as one of our best current action stars.  There are some interesting ideas about immortality as well, including a truly horrific fate for a former member of the team lost hundreds of years ago but there are also some vagaries that could have been slightly more clear, the biggest being the fact that, for some reason, the immortality just stops and you finally die.  The movie sets up some rules but there’s nothing as clean as, say, Highlander’s “cut off the head” method.

Although she hasn’t really ever done big action before, director Gina Prince-Bythewood does a great job delivering some cool set pieces.  It’s not quite as brutal and efficient as John Wick or Extraction but there are lots of cool touches to appreciate, probably most notably the team’s use of both medieval and modern weaponry.  There’s some awesome choreography where Andy or one of the other team members will use guns until they close the gap between an enemy and then use an ancient sword or ax to finish the job and the team’s ability to be killed and come back almost immediately is used to great effect as well.

The Old Guard takes the current John Wick style of action and puts some interesting and fun supernatural spins on it.  Along with cool set pieces, it also does a great job of developing and fleshing out its characters as well.  If you haven’t checked it out on Netflix yet, definitely head over there and take a look.

Action Hero of the Week: Andromache of Scythia