Dread XP asked ten different game developers to create a playable teaser in the same vein as 2015’s P.T. However, it wasn’t about creating P.T clones. That horse has been beaten and resurrected a couple of times by now. The goal of the collaboration was to explore different game designs that mess with the player’s mind, making them feel a little uneasy in the dark. The Dread X Collection is an anthology that each showcase their creators’ talents for innovative frights under a tight development cycle.

These bite-sized games are playable demos that could late be expanded into fully fleshed games. All of these developers have a few projects under their belt, giving these games a bit more meat than a skeleton prototype build. Each title utilizes different aspects of gaming, focusing on action, adventure, shooting, and role-playing elements. The titles below are what is included in the collection. 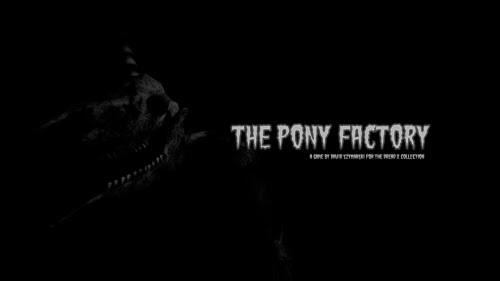 The Pony Factory by David Szymanski – Winston thought he could use hell energy to create magical ponies. Winston was wrong.

Magically ponies typically encourage friendship and love, but these ponies roaming dark hallways aren’t looking to give a warm hug. The Pony Factory is FPS that is a nod to Doom 3’s flashlight and gun swapping mechanic. The player has to quickly choose to see in the dark and to fire a gun, hoping they catch any monster in the hail of bullets. Health and ammo packs are scattered around the level, but some are demonic ponies that will hunt the player down. It’s action and frantic combat makes for some good tense gameplay. 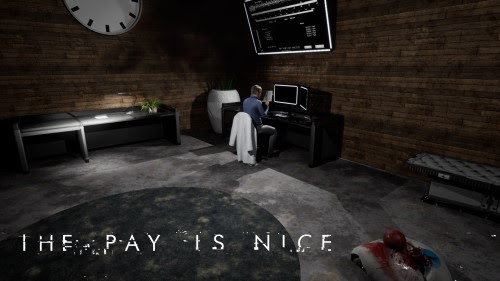 The Pay is Nice by Oddbreeze Games – Discover what happens in an ultra-secure facility, as you get ready for work and wander the dark halls of your office.

This game drops you into the role of a scientist whose job is to perform some inhuman objectives. The stress of the job is affecting the scientist and his reality starts to warp. The game has stiff tank controls and fixed cameras, nodding to its roots for the late 90s horror titles. 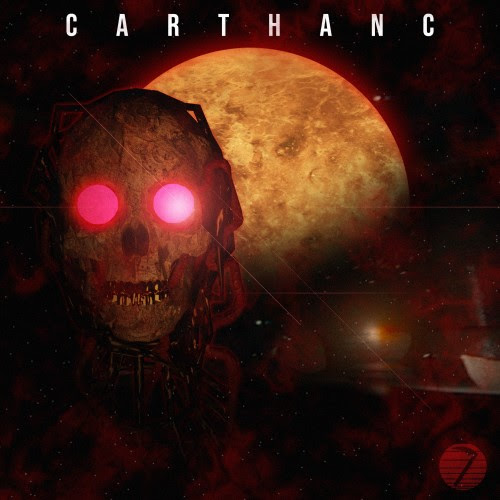 Carthanc by Scythe Dev Team – Explore the ruins of an ancient society on a dead planet.

Mixed somewhere between Dead Space and Outlast, Carthanc is an FPS platformer. The player takes the role of an explorer in an alien tomb that reveals that the dead do not like being disturb. There are some tricky jumps to make and frustration moments in tight spaces but captures the modern horror genre well. 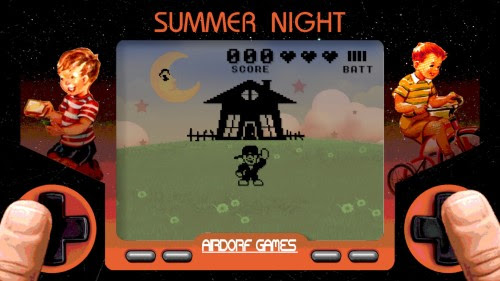 Summer Night by Airdorf – Run around in your backyard picking toadstools and chasing monkeys in this LCD handheld game where nothing scary happens!

Airdorf twists the simple and innocent presentation of playing a handheld game. The in-game is pretty simple, collecting mushrooms and stars for points and avoiding enemies. But the creep factor slowly rises after each round of repetitive play, building to something more sinister. 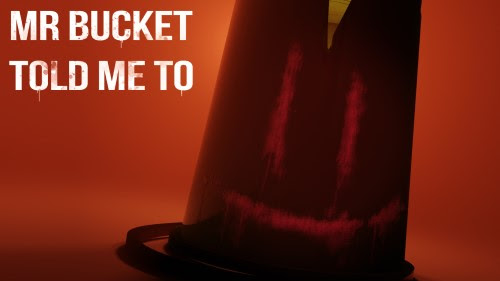 Mr. Bucket Told Me To by Strange Scaffold – The abandoned tools of your existence come back to haunt you in a surreal and terrifying tropical survival adventure.

At first glance, Mr. Bucket Told Me To looks like a cutie survival, but the game unravels into a nightmarish exploration of isolation. It’s a psychological horror title that had a bit of a surprising learning curve. There are many elements that distract the player from actually surviving, misleading the player to try and explore more of the island than survive. Behind all the cartoonish charm, the game has a real ghoulish factor to it. 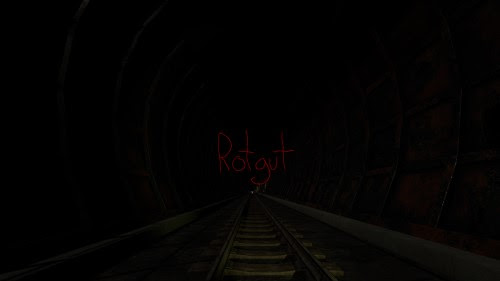 Rotgut by Snowrunner Productions – Walk through an abandoned tunnel and take some time to look at all the bizarre art. Piece together the lives of those who scribbled their thoughts on the walls.

Snowrunner Productions is known for its offbeat approaching to gaming, its take on horror is no surprise to be very…weird. Rotgut feels like a funky pop-up museum tour than a video game. This game feels like its representing a strange tale that has been retold even more chaotically.  It’s definitely an unorthodox game that only makes sense when packaged with this collection. 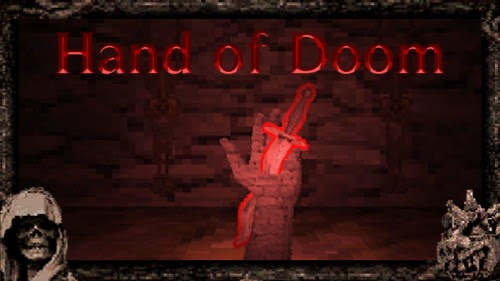 Hand of Doom by Torple Dook – Trapped in an arcane realm by the dark sorcery of the ubiquitous Master, can you learn the correct rituals and incantations needed to escape?

A throwback to first-person dungeon crawlers, Hand of Doom looks and controls like something that required a floppy disc to load. The game is presented in the classic UI designs, with text boxes and control options filling a quarter of the screen. The game focus on spell casting, by selecting a combination of syllables to form a spell that unlocks stuff. It’s a pretty cool mechanic that only gets a glimmer in this teaser. 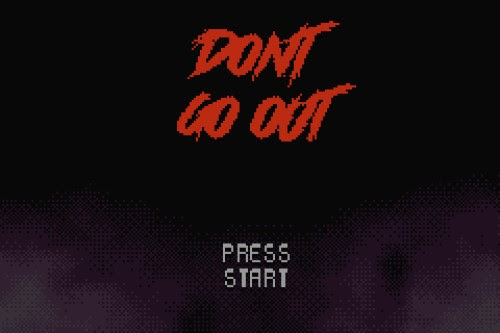 Ever load a saved file for an RPG you never played before? Don’t Go Out is that experience. The game is meant to have a sharp learning curve to understand it’s a tactical card collecting mechanics. The player controls a group of friends stuck in a cave and with a demonic presence chasing after them. Choosing the right cards and making careful sacrifices, can increase the chances of survival, but nothing is guaranteed. Secret Cow Level has a great formulate for a game that should get better when it’s refined. 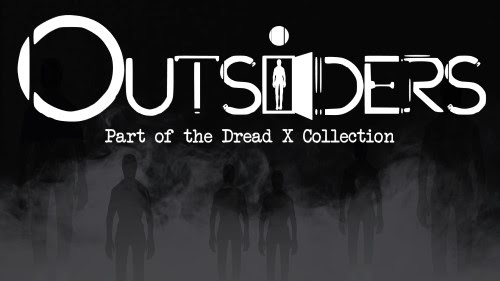 Outsiders by Mahelyk – Enter a world of uncertainly as you discover the truth behind the house, and behind the Outsiders.

From the brief moment at the start of Outsiders, you think its a direct P.T clone. But as you explore suspiciously empty surroundings, strange images and noises appear. A count down beings and you have a limited time to solve a puzzle and escape the unknown being chasing you. It’s pretty well craft game that knows its strength and subverts the expectations. 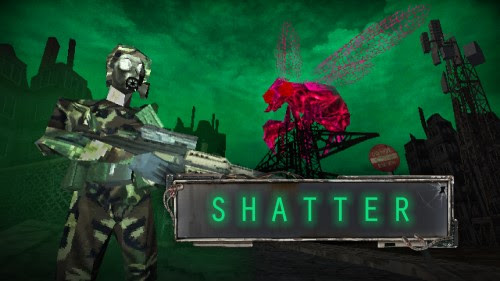 Shatter by Lovely Hellplace – In the ruins of future Britain, new gods rule the wastes.

A throwback to PSX era designs. Shatter looks like something before Half-Life made it big in the gaming scene. The cyber-punk dystopian theme is used well to tell a crazy world of a broken society, cybernetic implants, and alien bug overlords. This title works really well for fans of the block look of early 3D modeling before extra polygons made things a lot smoother to see.

The Dread X Collection a nice variety of games that explore different horror and game designs well. Every title captures a popular graphic or design trend, utilizing it well to mimic that era of gaming. The 16-bit Don’t Go Out has that early survival horror tone that was set by 1983’s game Sweet Home. Hand of Doom, Outsiders, and Shatter represent titles from the 90s that used FPS elements of that time and the early forms of 3D modeling. Since these games were made on a strict budget and time frame, there are unpolished features that can distract the gameplay. Character models can get buggy, glitching through walls. The sound design varies and can be screechy. And I have gotten stuck in invisible walls a few times that forced me to restart a game.

Overall the Dread X Collection is an awesome bundle of games put together by passion and creativity that any horror fan can enjoy. For the price point and quality of games, it’s an impressive collection that doesn’t fail to get a few shocking moments for the player. The Dread X Collection was released on May 26, 2020, on Steam.

Tweets of Action
My Tweets