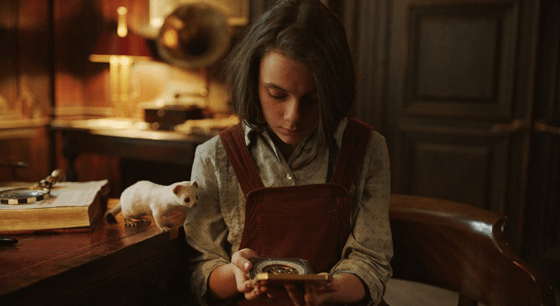 The joint BBC/HBO series His Dark Materials is back sometime this fall and the first trailer for Season 2 was revealed during the show’s Comic-Con @ Home panel.  Following the events of Season 1, Lyra (Dafne Keene) is transported to an alternate universe and meets Will (Amir Wilson), who comes from our universe.  The duo is supremely important to the fate of all the universes, especially Lyra, who has the ability to read the truth revealing alethiometer.  The fanatical government of the Magisterium is also seeking to squeeze their grip on Lyra’s world even tighter and war is brewing between them and people like the Gyptians, who want to live free from Magisterium control.  The second season is based on Phillip Pullman’s second book in the series, The Subtle Knife, and that titular weapon is wielded by new cast member Andrew Scott, who plays the mysterious John Parry, Will’s father who ends up journeying with Lin Manuel-Miranda’s Lee Scoresby.  Phoebe Waller-Bridge, Scott’s Fleabag co-star, is voicing Scott’s Daemon.  Check out the Season 2 trailer below.