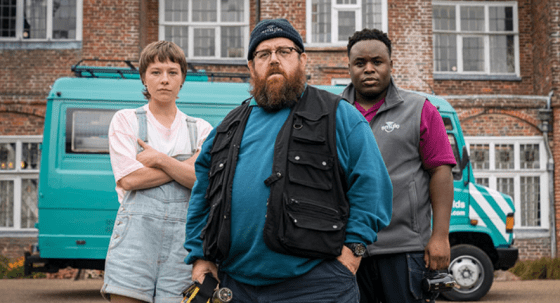 Coming soon to Prime Video, Nick Frost and Simon Pegg reunite for a new supernatural comedy series, Truth Seekers.  Frost plays Gus, the host of an online paranormal investigation show where he and his team Astrid (Emma D’Arcy) and Elton (Samson Kayo) investigate churches, underground bunkers, abandoned warehouses and other spooky locales looking for ghosts and other paranormal activity.  The team stumbles across some sort of sinister conspiracy and has to figure out what’s going on.  Simon Pegg plays a character named Dave, Gus’ boss, who might be in on the conspiracy.  Malcolm McDowell, Susie Wokoma and Julian Barratt co-star and Pegg and Frost are the creators and executive producers as well.  The show will be 8 episodes for it’s first season and should arrive on Prime Video later this year.  Check out the Comic Con @ Home trailer below.