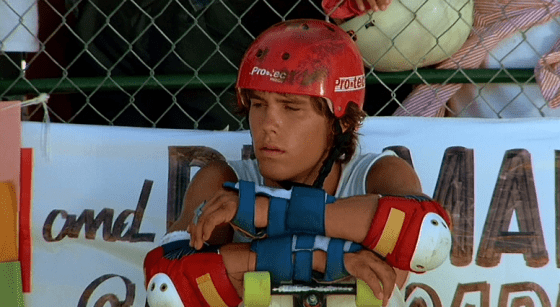 If you stop and think about it, the various members of the Red Hot Chili Peppers have a surprisingly long career appearing in films, either in cameos or full-on supporting roles. Flea, especially, has had a very successful side career as an actor, appearing as recently as last year in Queen & Slim.  The band, in their “Freaky Styley” iteration that included Anthony Keidis, Flea, Cliff Martinez, and Jack Sherman, all appeared in the 1986 cult skateboarding classic Thrashin’, which starred a young Josh Brolin.  Brolin played Corey Webster, an amateur skateboarder who dreams of becoming a professional downhill skateboarder.  On his quest for glory, he gets on the bad side of The Daggers, a punk rock skateboard gang whose leader Hook is Corey’s main rival but whose sister Chrissy becomes Corey’s love interest.  Among memorable scenes like the skateboarding “joust” and the final downhill battle, there is the “Thrash Bash” where Corey and Chrissy get to experience the full funkadelic style of early RHCP.  Check out the scene below.